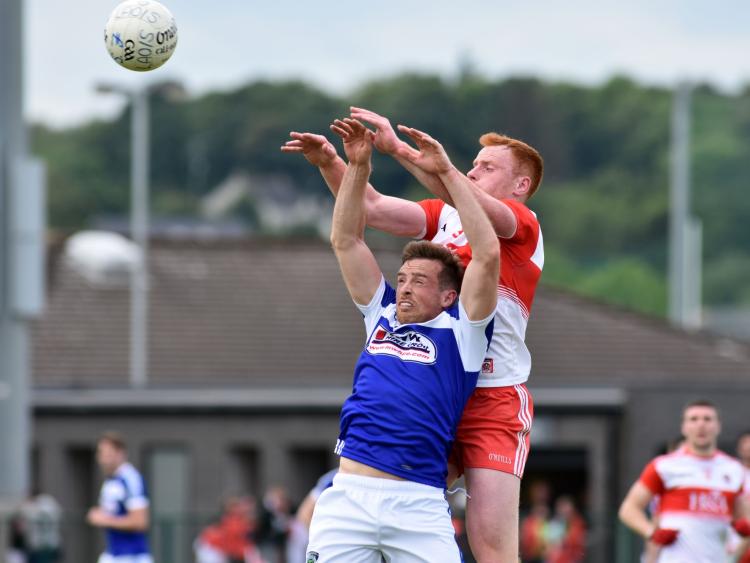 The Laois senior footballers emerged from the Owenbeg mountains with a win under their belts as they defeated Derry by four points, Eoin Lowry firing the only goal of the game five minutes from time.

Laois’s long-trip North was that bit easier on the way home as John Sugrue’s men got the job done, their place in Monday morning’s draw and safe passage to Round 3 of the Qualifiers secured.

The game was neck-and-neck for the vast majority, never more than a score or two between two well-matched sides, until substitutes Marty Scully and Lowry combined to see the Killeshin man finish low to the net and swing the result in Laois’s favour.

Laois trailed by the minimum going in at the interval, man-of-the-match Daniel O’Reilly pulling one back for the O’Moore men on the stroke of half-time to leave the score reading 0-8 to 0-7.

Similar to the Meath game, Laois had three goal opportunities go begging when the game was in the melting pot, level at nine points apiece in the third quarter. Two chances fell to Colm Murphy, one blazing wide and the other saved while Evan O’Carroll’s effort was also denied by the Derry goalkeeper Thomas Mallon.

Derry opened the scoring three minutes in when full-forward Ryan Bell split the uprights. Shane McGuigan followed with a free for the home side to double their advantage with five minutes on the clock.

Laois got on the scoresheet directly after when Colm Murphy hit his first of three for the half. A clever quick-free from Donie Kingston picked out Evan O'Carroll in the corner who swung over to level the sides with ten minutes played.

Benny Heron and Murphy traded scores just after the quarter of an hour mark, Murphy's a confident kick from distance.
Laois went on to briefly take the lead through Murphy's third point of the half after Conor Boyle provided the assist. Derry replied with a McGuigan free to bring them back level.

Late addition to the starting team Trevor Collins edged Laois ahead after he got on the end of an insightful pass from Paddy O'Sullivan on his own 45 to set Collins away. It wasn't to last long though as Derry hit back a minute later through a Ryan Bell free.
A close-range Evan O'Carroll free pushed Laois ahead, but Derry once again replied. This time they slotted three points in a row through McGuigan (free), Ciaran McFaul and Heron as the Oak Leaf county went two clear approaching the break.

Danny O'Reilly pulled one back right on the stroke of half-time to leave Laois trailing by a point at the interval, 0-8 to 0-7.

Derry doubled their advantage thirty seconds after the restart with Slaughtneil's Chrissy McKaigue roaming forward to swing over a beautiful score for the home side.
Laois rattled off two on the hop, both from Donie Kingston frees, to level the sides at nine points apiece shortly after.

Laois then had three goal chances in as many minutes. The first of Colm Murphy's two efforts blazed wide across the goalmouth after a perfectly-weighted pass from Paul Kingston found him on the edge of the square, and his second was somehow saved by Thomas Mallon in the Derry goals. Evan O'Carroll had an opportunity but his effort was blocked as Derry got off the hook and Laois failed to capitalise.

Derry went ahead shortly after when Bell slotted a free from 45 metres out, but Donie Kingston replied with a free for the O'Moore men. Evan O'Carroll set up Donie Kingston for Laois to take the lead forty-eight minutes in.

Shane McGuigan swung over a cracker for the Derry men to level the sides with twenty minutes to go, and then a McGuigan free fourteen minutes later pushed Derry into a narrow lead.
Laois lost Donie Kingston and Robbie Pigott within five minutes of each other, both to black cards.

Laois roared back into the lead five minutes from time when substitutes Marty Scully and Eoin Lowry combined to see the Killeshin man roll the ball into the back of the net for the only goal of the game and catapult Laois into the lead.

Laois compounded their lead in the first minute of injury-time with a Kieran Lillis point after a mistake in the Derry defence saw O'Reilly pick up the loose ball before passing to Lillis.
A late red card for Ciaran McFaul for an off the ball incident reduced Derry to fourteen-men in the fourth minute of injury-time.

Laois saw out the victory with a late Eoin Lowry free to ensure safe progression to the next round of the qualifiers.

Laois were drawn at home to neighbours Offaly in the next round to be played this Saturday at O'Moore Park.