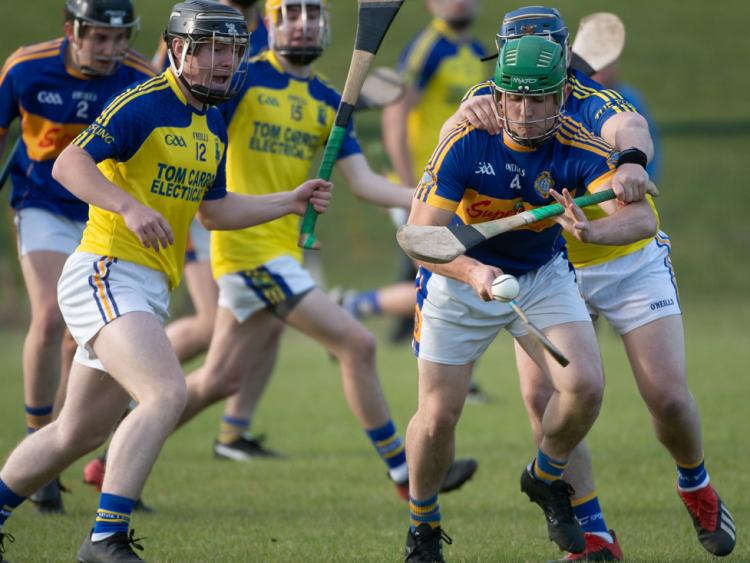 A bit of an upset occurred on Friday night as bottom of the table Abbeyleix finished with nine points to spare over Clough-Ballacolla in the ACHL Division 1.

Before this game, Abbeyleix had lost every game and Clough-Ballacolla had won every one of their league games.

However, a more determined Abbeyleix outfit managed to overcome Clough-Ballcolla to pick up a crucial win in the battle to avoid relegation, and also damage the visitors odds of league silverware.

Eoghan Fennelly opened the scoring for Abbeyleix from distance, and they struck for a goal soon after. Midfielder Rory McEvoy read a pass coming out of the Clough-Ballacolla defence, intercepted it, and lashed it to the roof of the net.

Aidan Corby, who would account for eleven of his sides fourteen scores, got Clough-Ballacolla up and running through a free.

Wing-forward Colm Walsh replied down the other end after a beautiful catch by centre-forward Dayne Peacock. Aidan Corby replied with a point from play for Clough-Ballacolla, but Abbeyleix's other wing-forward, Ciaran Carroll, grabbed a point for them from an acute angle.

Corby then put a scintillating side-line ball over the bar, but Abbeyleix struck for goal number two. Stephen Thompson fended off John A Delaney, before unselfishly feeding Conor Bergin who hit the net.

Corby and Fennelly exchanged further frees, before Clough-Ballacolla finished the first half strongly with Jordan Walshe and two Corby frees only being returned with an Aaron Carroll point for Abbeyleix as they led 2-8 to 0-10 at half-time.

Corby reduced arrears to just three upon the restart, but Abbeyleix kept up their relentless work rate and were rewarded with three scores in a row.

Dayne Peacock got their opening point of the second half, before Fennelly split the posts from a free.

Midfielder Aaron Carroll caught a Clough-Ballacolla puck-out unmarked, burst forward to jostle an opposing player out of his way, and duly fired over the bar to put Abbeyleix up by six.

Corby responded with his sixth score from a free for the evening, but Fennelly showed he was just as accurate down the other end with a sublime side-line score much to the home supporters delight.

Colm Walsh then cantered forward to grab his second point of the game for Abbeyleix, as they began to put the result beyond Clough-Ballacolla.

The away side didn't pose much of a threat to the Abbeyleix net, and goals were what they desperately needed at this stage. Corby put over his last point of the match from a placed ball effort, but the energetic Barry Walsh responded for Abbeyleix  with another highlight-worthy score.

Abbeyleix finished with points from the hurls of Declan Phelan (65’),  Conor Bergin and Fennelly (free), while Clough-Ballacolla's final score came from Damien Bergin.

Abbeyleix now know they must win again against The Harps next week away from home to stand any chance of avoiding relegation. Clough-Ballacolla, on the opposite end of the spectrum, face Borris-Kilcotton in a top of the table clash.