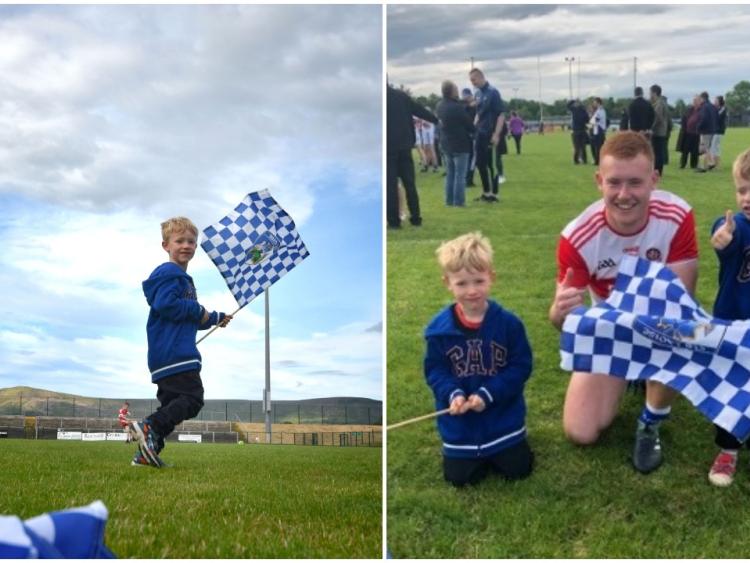 The Laois senior footballers go into battle again this evening when they take on Offaly in O'Moore Park.

Yesterday, we asked for the publics help to find a young Laois supporter who travelled all the way to Owenbeg last weekend to see the Laois footballers defeat Derry in Round 2 of the Qualifiers. The stunning photo was captured by our photographer and featured as the back page of this week's edition of the Leinster Express:

Laois GAA were kind enough to reward their loyal fan with tickets to tonight's game, now all we needed to do was find our mystery man.

And we have found him - Colm Maher from Portarlington. After being tagged, messaged and called by friends and family on Facebook Colm's Dad, Paul, reached out and told us a bit about their trip to Derry last Saturday.

Paul and the kids: Ellie (8), Colm (6) and Donagh (4) have been attending Laois matches for quite some time. Originally, it was Ellie and Colm that accompanied their Dad to the games, but now the pilgrimage to the matches is Colm, Donagh and Daddy's day out.

Colm is named after his uncle of the same name, Colm Maher, who played with Laois from underage to Senior - lining out at corner-forward in the 1991 Leinster final defeat to Meath.

Paul and his two boys made most of Laois's games in Division 3 of the National Football League this year, but missed the Leinster semi-final defeat to Meath at Croke Park. The boys were upset about missing out on a trip to Croker, so Paul promised to bring them to the next game regardless of who they were playing or where it was.

Now that one kind of backfired on Paul as Laois were drawn away to Derry in Round 2 of the Qualifiers, meaning a long trip North to Owenbeg was on the cards. Thankfully, there were no bumps, hiccups or wrong-turns along the way. Although Colm and Donagh were fierce excited for the return-leg of the trip as it was a 'Night Drive', meaning the boys brought their pyjamas to change into on the way home.

Paul told us the lads absolutely relish the half-time kick around and meeting their heroes, the players, after the game - regardless of whether they win, lose or draw.

With thanks to Laois GAA, Paul, Colm and Donagh will make the shorter trip to O'Moore Park, Portlaoise, this evening to watch their heroes line-out against Offaly as they look to secure their place in Monday morning's draw for Round 4 of the qualifiers.

Below is Colm and Donagh pictured with one of their favourite players, Portarlington man and Laois full-forward Colm Murphy (having swapped his familiar blue jersey for his Derry counterparts), after the win over Derry in Owenbeg. 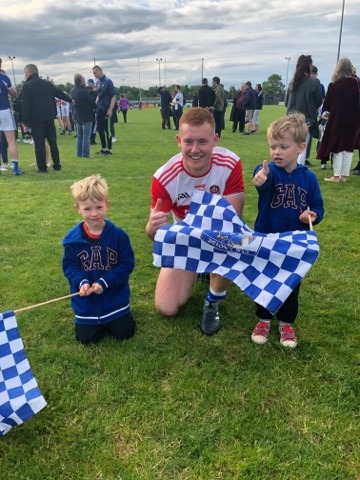 Best of luck to John Sugrue and the Laois footballers this evening, and we hope the Maher's enjoy their day out. Throw in at O'Moore Park is 7pm.