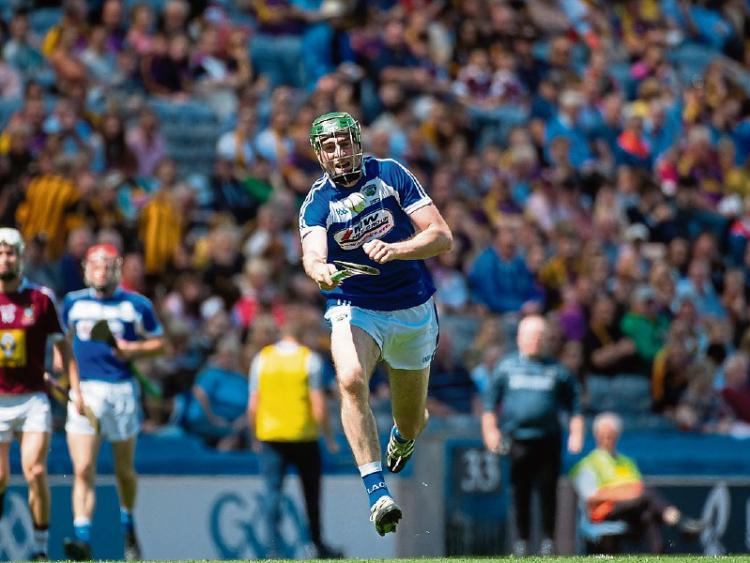 As a Galway native who lives in Laois, I was thrilled to see my ‘adopted’ county claim silverware in Croke Park last weekend.

I’ve been spoiled in recent years by regular trips to the GAA’s HQ to see the Galway hurlers play in some of the best games seen in living memory. But there have been many bad days for a county that was the kicking boy of hurling for many years.

To see a Laois team go out onto the hallowed turf at senior inter-county level was as enjoyable as the Galway good days.

It was refreshing to see Paddy Purcell walking up the steps to collect a national trophy. It is almost incredible that a senior hurling captain representing a strong GAA county like Laois had never played in Croke Park never mind led his team to victory.

To think that Ireland's rugby and soccer teams have played there more often in recent years than Laois is wrong.

His victory speech reminded me in some ways of Joe Connolly's Galway address in 1980.

The Errill man spoke from the heart to his own people. He was just so proud to be a Laois man and win for his county.

Connolly's speech was a message to the GAA top brass and big counties that Galway, so long the bridesmaid, had broken through and must now be given respect.

Purcell's speech, even if he didn't intend it to be, sent out a similar message. It was a speech which sent out the message that Laois and similar 'small' counties are as important to the GAA and Croke Park as Dublin, Cork, Limerick, Kerry, Kilkenny, Tipperary, Tyrone, Galway (yes), and some of the other superpowers.

Laois does not have a Pat McDonagh or JP McManus to bankroll the vital extras. There is no myriad of funding channels that the likes of Dublin can draw upon to field multiple All-Ireland winning teams.

Laois is a small county split between hurling and football. It has to operate on a tight budget and limited playing resources. But these are the reasons why the GAA badly needs the likes of Laois more so than some admit.

Laois has a vibrant club scene in both hurling and football.

It is a county that must be fostered and nurtured by the GAA.

In recent years the Laois county board has embarked on building a centre of excellence in Portlaoise that serves the association and members of the community through the link with the Laois Offaly Education and Training Board.

In the past it had the vision to upgrade O'Moore Park on limited resources. That achievement should have been remembered last year when Kildare ran the Newbridge or Nowhere campaign.

What irks many, and perhaps justifiably so, is how the ‘influencers’ seem to be dictating the future roadmap for smaller counties like Laois, Offaly, Longford and many others.

The inter-county scene in Leinster, especially at football level, is disintegrating. Not even the bigger counties like Meath and Kildare can compete with Dublin.

Wexford and Kilkenny have all but given up on football. The likes of Louth and Wicklow are turning into GAA wastelands at inter-county level.

This is a crisis for Gaelic games.

Leinster is the part of the country that the GAA needs to focus most on. The populations of the province's counties are growing rapidly and counties like Laois that were traditionally rural are now dominated by big towns where the GAA is in danger of being passed out.

Leinster towns have also attracted many many immigrants. This influx has yet to materialise in GAA teams in Leinster counties.

Louth has the highest population density of any county in Ireland. It was beaten by Leitrim in last year's football qualifiers. How can this be ignored?

Laois stands out from most Leinster counties by being able to field competitive teams in hurling and football.

So, it should be the poster boy that the GAA should be promoting as demonstrating what can be achieved.

Yet, so far this year, no Laois team has made it onto live TV. Neither team will be featured by RTÉ or Sky Sports this weekend even though they are playing Dublin and Cork.

The GAA could influence this scheduling but doesn’t appear to see the importance of doing so.

Many other counties are ignored by the broadcasters through the championship year. The only way of watching Laois and other 'weaker' counties on a TV is on the internet. Of course, many rural homes do not have a reliable internet connection.

A new system will be rolled out next year in the football championship which will make it extremely difficult for smaller counties to compete with the big teams.

The GAA would want to be careful with this one. Some counties may throw the hat at intercounty competitions from now on.

Thousands of people showed up in O'Moore Park to see Laois defeat Offaly. The pundits hardly gave it a mention on The Sunday Game. These same pundits want an elitist competition which will freeze out Laois and Offaly.

Does the GAA think that thousands will continue to turn out for such games if not even a glint of the Sam Maguire is at stake.

One pundit, Sean Kavanagh hails from Tyrone. He wants a tier two competition in Gaelic Football. He dismissed Laois in the Derry qualifier. He said Derry had a team of winners and would make it to the Super 8. Derry lost to Laois in Derry.

Anybody with a memory beyond the deserved glory that Mickey Harte has brought to Sean's county will remember how Ulster teams were perceived. Other than Down in the 1960s and Cavan in the 50s, Ulster football was dismissed out of hand. Tyrone, Armagh and other teams trudged to Croke Park in the 70s and 80s to get hammered in pre-backdoor finals by Kerry and Dublin.

But these Ulster teams were not disrespected. Nobody in the GAA said they should not be allowed to compete for Sam Maguire. Of course, time and standards change but the notion of respect doesn't Sean.

Times and standards changed in Ulster and since the 1990s Armagh, Derry, Donegal, Down and, of course, Tyrone have all taken Sam home.

Laois will be written off this weekend against the Cork footballers and Dublin hurlers.

The best way to put the pundits in their place is for Laois to put the big two to the sword.