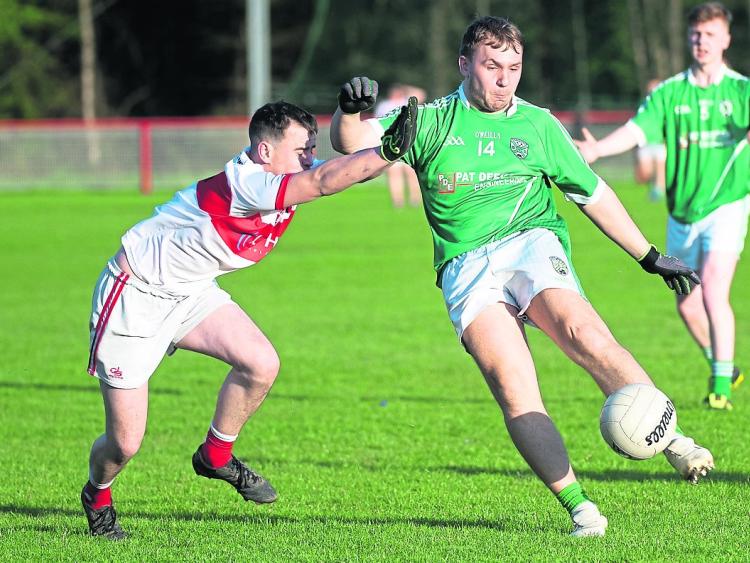 A Jody Dillon free in the fourth minute of added time earned Stradbally a draw in this keenly contested and at times controversial ACFL Division 1B clash on Thursday night in Bill Delaney Park.

The home side were seven points down at one stage in the first half and five in arrears at half time, but managed to claw it back in the second half. They upped the tempo of the game and forced Emo into a series of mistakes, outscoring them 0-9 to 0-4 in the second half.

The second half was notable for a number of disputed moments involving the officials, with two points awarded which were keenly contested by the opposition, the referee having to consult with his umpires on three occasions to decide whether to award a 45, and Stradbally had someone sent from the sideline after an exchange of words with referee Mick Tarpey.

Stradbally had opened the scoring with a point from Jody Dillon in the second minute, but Cian Langford quickly drew Emo back on level terms. That sparked a period of good play from Emo as they took the lead with a point from the right wing by Nigel Murphy, and a poor pass by Stradbally allowed James Hilliard to stretch the Emo lead out to two.

Darren Strong then got their fourth in a row with a free from the left wing after a foul on David Gorman, who was forced to withdraw. Jack Deegan broke the run of Emo scores with a good score but Emo hit back with interest, Stephen Norton scoring a brilliant point from the right wing and Paul Lawlor adding another from close range.

Emo were well on top now and the pressed home their advantage in fine style. Darren Strong claimed a mark from a kickout, and played the ball into space for Rorie Meredith. He raced straight through the middle of the field before offloading to Nigel Murphy, who duly slotted to the bottom corner.

Stradbally finally got going after that, with Jody Dillon seeing a shot saved on the line by Paddy Dunne before he finally hit the back of the net in the 22nd minute.

Emo responded well to that setback, and lead by five points at half time 1-10 to 1-5.

Stradbally needed to pick things up in the second half and they duly did, with Tom Shiel pointing 19 seconds into the second half. Dillon and Shiel added further points to get the gap down to two, but Nigel Murphy got one back for Emo.

Stradbally were on a charge though and four points on the spin to take the lead for the first time since the first minute. It was now Emo’s turn to hit form and they got three in a row themselves through Nigel Murphy, Dylan Langford and Paul Lawlor to lead by two with normal time up.
However, Stradbally found one last push left in them and frees from Tom Shiel and Jody Dillon salvaged them a late draw.