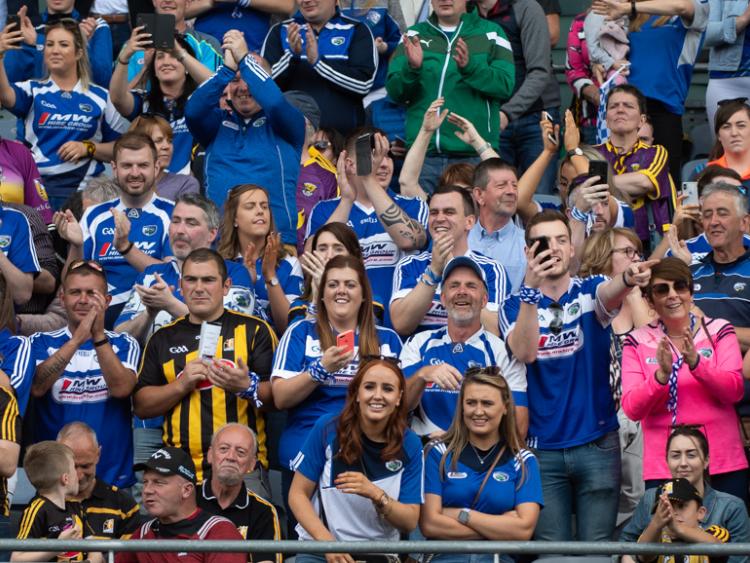 Some of the sizeable Laois contingent that was in Croke Park for the Joe McDonagh Cup final. Picture: Denis Byrne

Laois GAA fans have been put on the spot to come out in force behind the county's hurlers in Portlaoise because the Dublin camp is expecting them to come to O'Moore Park in their 'droves'.

Dublin GAA has thrown its not insubstantial resources behind a social media campaign to get its fans to travel and be the extra ingredient that helped them see off Galway last month.

Dublin GAA has gone to the trouble of making a video featuring coach Mattie Kenny and players Eoghan O'Donnell and David Treacy.

Kenny said the support in the win over his native Galway was key.

"We need them to travel in their numbers, we need them down in Portlaoise and getting behind the team like they did in Parnell a couple of weeks ago," he said.

Eoghan O'Donnell said the support is important because there is only a 'puck of a ball' in many of the games.

David Treacy was conscious of the crowds going to the Laois games.

"They come in droves and that is what we are expecting. No better crowd to match that than the Dublin team. It's only an hour outside of Dublin so we expect a huge big crowd...We'd love to have a massive crowd to be that 16th man to drive us on every minute," he said.

Treacy expects to play in the Laois game on Sunday afternoon having returned from injury.

"We need them to travel in their numbers, we need them down in Portlaoise and getting behind the team like they did in Parnell a couple of weeks ago".

Dublin's hurlers are asking fans to continue their huge support of the side this Sunday against Laois #COYBIB pic.twitter.com/77soeCl9r4