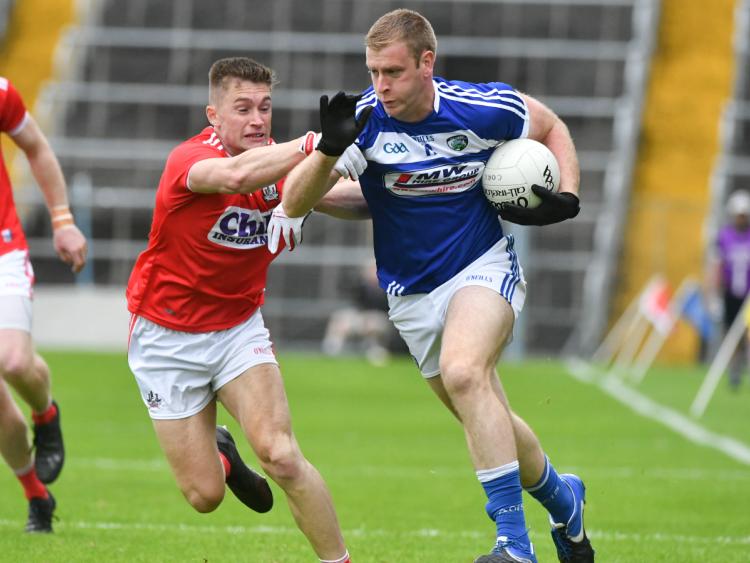 The Laois footballers season came to an end this evening in Semple Stadium, Cork sending four second-half goals past the O'Moore men to secure their place in the Super 8s.

Laois trailed by five points going in at the break after a good first-half performance, Cork hitting rattling off four in the final minutes of the half to send them in with a cushion. The Rebels overpowered Laois in the second-half, hitting the Laois net four times in the closing half to comfortably book their place in the Super 8s.

Laois had a goal chance in the opening minute, Donie Kingston powering his way through before seeing his effort blaze wide across the face of goal. Donie Kingston opened the Laois account with a close range free, and another two minutes later after a patient build-up by the Laois pack.

Cork came back with Mark Collins and Brian Hurley points to level the sides. Robbie Pigott excellently picked out Eoin Lowry for the Killeshin man to kick a great score, but Cork responded immediately with Collin' second with the aid of Hawk Eye.

Paul and Donie Kingston combined to see the latter split the uprights. Cork fired three more with Collins getting another with Hawk Eye called for once again.

A quick free from Pigott found Colm Murphy inside, and even though he was isolated, he kicked a fine point from a tricky angle. Having been fouled himself, Donie Kingston converted the resulting free to level the sides after 24 minutes.

Donie Kingston added another for Laois either side of points from Collins and Hurley, but Cork finished out the half strong with Ronan O'Toole, Ruairi Deane, Collins and Hurley all pointing to send them in five points ahead at the interval - 0-12 to 0-7.

A goal within the first minute of the restart was not the start Laois supporters would have hoped for, Brian Hurley volleying to the net after being teed up by Collins. Points followed for Liam O'Donovan and Hurley, before Hurley got on the end of a long ball in to rattle the Laois net for the second time.

Laois re-opened their account with a free from Donie Kingston on 45 minutes, and substitute Evan O'Carroll almost got in for a goal two minutes later but his shot trailed wide. Trevor Collins sent over a composed point shortly after to reduce the Laois deficit to twelve points.

Cork added their third goal through Mark Collins with just under 20 minutes to go after the Cork pack toyed with the Laois rearguard. Laois, to their credit, didn't give up and hit for a goal of their own through Marty Scully after a super one-handed catch by Donie Kingston.

Laois kept searching for a way back with points from Donie Kingston (3) and O'Carroll, but Cork finished off their rout with a fourth goal five minutes from time through substitute Paul Kerrigan. Cork closed out the game and sealed their place in the Super 8s with two final points from Stephen Sherlock.