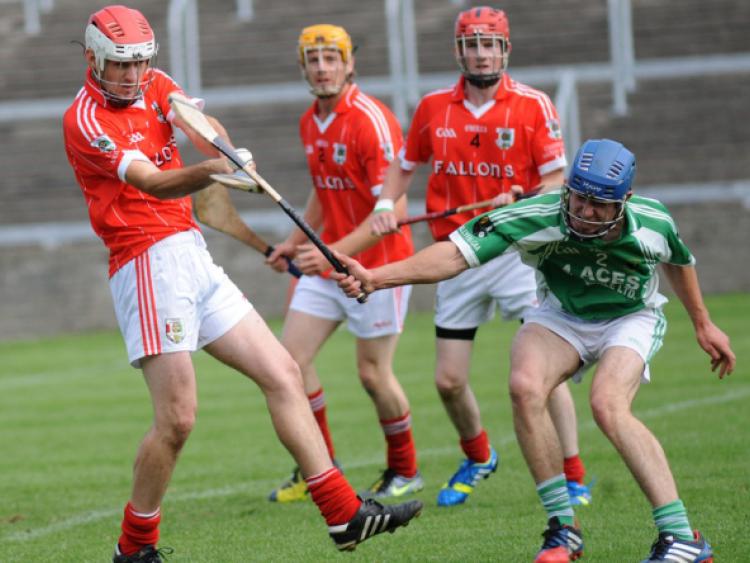 Ballyfin march on in their pursuit of top-flight hurling following a gritty display to see off a tough Clonaslee St Manmans challenge on Sunday afternoon.

Ballyfin march on in their pursuit of top-flight hurling following a gritty display to see off a tough Clonaslee St Manmans challenge on Sunday afternoon.

Andy Bergin’s men started brightly and hit the first three scores of the game before Clonaslee responded with scores from Willie Young and Ciaran Hyland.

Ballyfin hit back and they bagged the first of the games five goals twelve minutes in when Eamon Duff tapped home despite a superb Cormac Dunne save that initially denied Garreth Dunphy.

Clonaslee dug deep to recover and of the next eight points, six went to them to trim the lead to the minimum before a late Ballyfin surge saw them go in with a healthy six point lead.

That became a lot more achievable when play resumed however, and Ciaran Hyland’s fine score straight after the throw in sparked yet another revival from Clonaslee who hit 1-3 without reply to leave the scores all square for the first time since the start of the game.

Willie Young followed Hyland’s effort with a neat free and when Ballyfin keeper John Downey allowed an under-hit Tommy Tynan effort to creep past him and trickle over the line it looked like Clonaslee were primed to seize control. Tynan’s neat equalising point a minute later reinforced that but in this end-to-end affair it was perhaps inevitable that Ballyfin would edge ahead yet again.

Two Garreth Dunphy frees did just that, and although Conor Hyland’s long-range free halved the deficit Ballyfin turned the screw with two quick-fire goals midway through the half to effectively seal the deal. Garreth Dunphy bagged the first and Chris Dunne followed suit a minute later when he collected Dermot McGill’s lovely cross-goal ball and fired into the roof of the net.

Hopes of another Clonaslee comeback were hindered by Glen McEvoy’s dismissal for a second bookable defence but to their credit they managed to string three unanswered scores together to cut the Ballyfin lead to a goal with four minutes left on the clock.

Ballyfin managed to regroup before Clonaslee’s designs on a shock fightback became realistic, and late points from Dunphy and Sean Lowry secured the win.