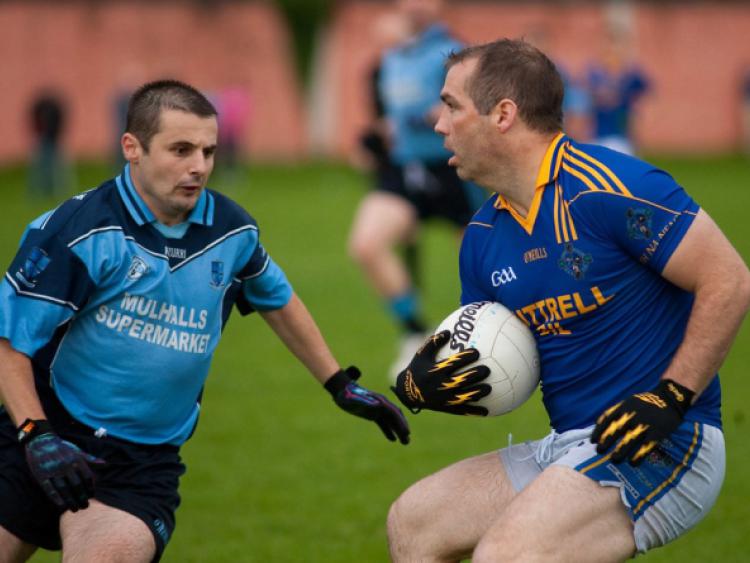 Intermediate title favourites, Ballyroan Abbey, produced an improved second half performance to see them breeze through to the next stage of the Championship following a four point victory over Annanough.

Intermediate title favourites, Ballyroan Abbey, produced an improved second half performance to see them breeze through to the next stage of the Championship following a four point victory over Annanough.

With treacherous conditions taking a toll on play, Ballyroan Abbey conceded a goal with mere seconds on the clock.

Full-forward Colin Miller found himself one-on-one with Ballyroan Abbey goalkeeper, Gary Scully, only to be denied. Fortunately for Annanough, James Miller was on hand to tap home the rebound to give his side an early lead.

Ballyroan Abbey replied on the five minute mark, with full-forward, Martin Scully, raising the white flag. Two minutes later, it was Scully who was bundled over on his way through to goal leaving referee, Joe Brennan, with no choice but to award a penalty.

In his first Championship appearance for the club since his return from Dublin side, Parnells, MJ Tierney placed the ball into the bottom right corner from the penalty spot to send Ballyroan Abbey one point clear after seven minutes.

Annanough went a step further and reclaimed the lead with their second goal of the day through Donal Miller, before Simon Miller gave them a three point cushion.

Ballyroan Abbey went on to keep Annanough scoreless for the final eleven minutes of the half, while also racking up four points from Scott Conroy (2), MJ Tierney and James Keegan to see them lead by a point at the interval.

Ballyroan Abbey dominated the second half for the most part, as four of Annanough’s second half points came in the final four minutes of the game. Ballyroan Abbey grabbed a second goal through Niall Wallace, while MJ Tierney added a further four points.

Annanough finished strongly with the final four points of the game, but their efforts were in vain as time caught up with their endeavours as Ballyroan Abbey held on to win by four points.