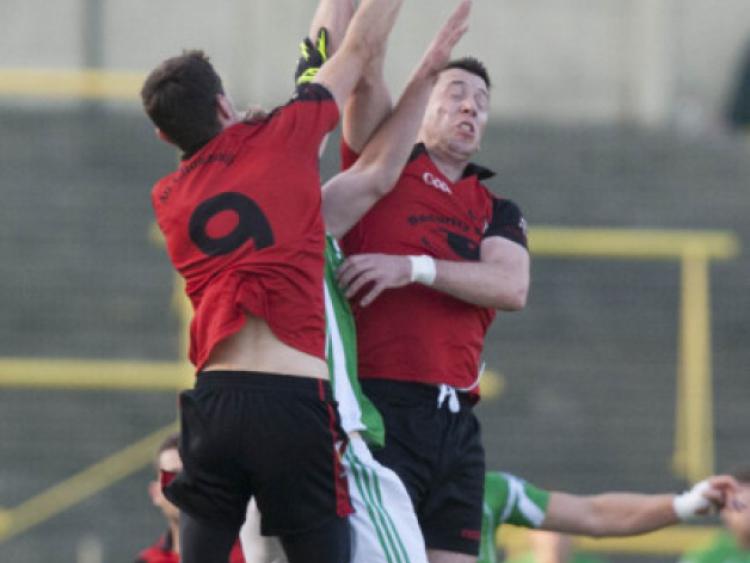 What a difference a week makes. Just six days previously a last-gasp Colm Kelly free saved Stradbally from a surprise defeat at the hands of The Rock.

What a difference a week makes. Just six days previously a last-gasp Colm Kelly free saved Stradbally from a surprise defeat at the hands of The Rock.

Those who felt that the Mountmellick side had let their chance slip were proved right here as Stradbally, even without Kelly, disposed of The Rock with alarming ease.

It was as straightforward a win as you are likely to see, and even without really hitting fifth gear Stradbally amassed a twelve point lead at one stage before allowing The Rock notch a couple of late scores to take some of the gloss off the win.

To be fair, those late scores showed that even when staring defeat in the face The Rock men continued to give their all but the gulf in class was evident right from the start.

Ciaran Delaney got the show underway with a well-struck free that curled sweetly over the bar from thirty yards, but after Delaney missed a carbon copy a minute later The Rock were back on terms.

Shane O’Connell was the man who got the score, as he shrugged off his marker before pointing from a tight angle on the left hand side of the field.

That would be the last Rock score from play until the last minute of the game, and it was all one-way traffic in scoring terms after that.

Darren Maher restored the Strad lead a minute later before a fortunate goal from the boot of the impressive Greg Ramsbottom really took the early gusto out of The Rock men.

The veteran forward enjoyed a fine display throughout and when he jinked outside onto his right and went to point from the 21, his under-hit effort dropped over the head of Terence Conlon and into the far corner of the net.

The rest of the half, and most of the second belonged completely to the men in green as they hit the next eight scores without reply to seal their passage to the winners section.

A few meaty challenges ensured that the competitive nature of the game remained but that didn’t transfer itself to the scoreboard as points from Stephen Lawlor and Conor Delaney finished the first half with their side leading by 1-5 to 0-2.

Surprisingly there was no changes made at the break from The Rock despite only managing a single point from play, and so it was less surprising when Stradbally’s dominance continued.

Just as he did in the first half, Kieran Delaney acted first with a superb effort before a Conor Delaney free finally saw The Rock make a change by bringing in the returning Brian Croke.

It made little difference. Stradbally were scoring at will and Padraig Langton, Greg Ramsbottom, another from Conor Delaney and Jamie Kavanagh’s second point of the evening meant that with fifteen minutes left the match was all but over.

Stradbally took their feet off the gas in that final quarter and an ever battling Rock side got some face-saving scores late on.

Two David Murphy frees from the 21 either side of a Tom Shiels free at the other end snipped one point off the twelve before a fine move involving Conor Flynn and Shane O’Connell saw Tom McDonald with the goal chance and he buried a fine left-footed shot beyond Derek Beale.

David Murphy finished the scoring with his first from play after good work from Philip Peake but it was scant consolation.

Stradbally progress to play beaten league finalists Arles-Killeen this Sunday, while The Rock must regain the form of the first round when they meet The Heath, where a loss will end their interest in the 2013 championship.