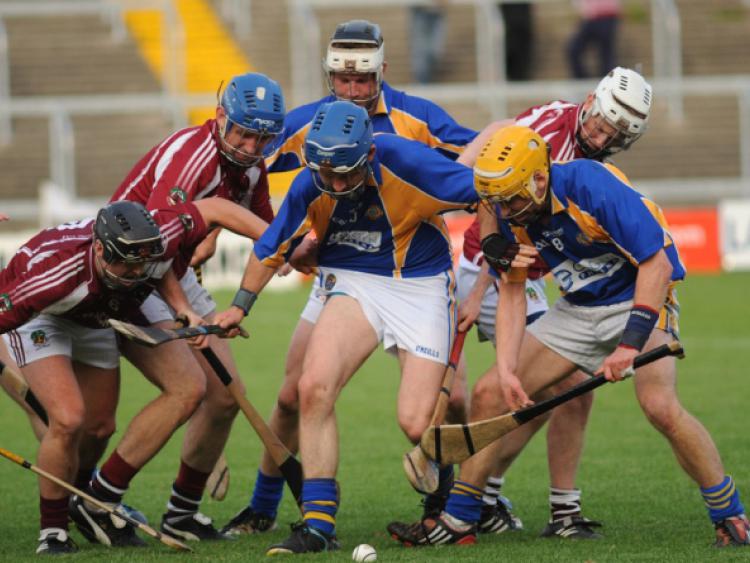 A ten point haul from Willie Hyland helped Clough-Ballacolla to retain their Laois SHC hopes for 2013 on Sunday evening against Ballinakill.

A ten point haul from Willie Hyland helped Clough-Ballacolla to retain their Laois SHC hopes for 2013 on Sunday evening against Ballinakill.

The final scoreline probably flattered Ballacolla a little, as Ballinakill had been right in the game, and were only four behind with four minutes to play. They just couldn’t get any closer, and while the winning margin may have been flattering, there could be no doubting that Ballacoll were deserving winners.

They just came out on the right side of a closely contested first half, but steadily pulled away in the second to set up a mouth-watering quarter-final clash with Rathdowney-Errill, in a repeat of last year’s final.

They will need to improve on this showing if they are to dethrone the reigning champions, but they did what was expected of them here. They struggled at times, as Ballinakill looked the hungrier side in the opening half, and were unlucky to be behind at half time.

Ballacolla had gotten off to a good start, with Willie Hyland pointing a free with less than a minute on the clock. Ballinakill too their time to settle, but Seamus Dwyer opened his account with an excellent long-range point, and he would go on to dominate the half in terms of scoring, for Ballinakill.

Willie Hyland (free) and Aidan Corby gave Ballacolla a two point lead, but Dwyer again hit back for Ballinakill, and again from distance, before Hyland added his third from a placed ball. That score came just before Cha Dwyer opened his account, and with Seamus Dwyer adding his third, it saw the teams level after 17 minutes.

Mick McEvoy and John A Delaney (free) quickly restored Clough-Ballacolla’s lead, but a fourth point from Seamus Dwyer and two from Eamon Jackman had Ballinakill in front, and Clough-Ballacoll were sufficiently worried to send for Stephen Maher from the subs bench, after he was deemed unfit to play from the outset.

His first contribution was to point from the right wing, but Dwyer’s fifth point from play and a free from Eamon Jackman had Ballinakill two in front as half-time quickly approached.

It was all looking good for Ballinakill at that stage until a long-ball from John A Delaney was missed by Willie Hyland and bounced inot the grateful hands of Aidan Corby, and he flashed the shot past Tony O’Shaughnessy for the games only goal.

A point from John A Delaney rounded off the scoring for the half, and it was a crushing end to the first period for Ballinakill, who saw all their good work undone in a matter of minutes.

Both teams came out swinging at the start of the second half, as they hit two points apiece in the opening seven minutes to maintin the two point gap between them.

It took a quick-fire brace from Willie Hyland to open up some clear daylight, and Ballinakill would struggle to get close from that point on.

Damien Carter had their best chance of a goal, but his shot was deflected over, and two points in response from Clough-Ballacolla had them five ahead with 15 minutes left.

Ballinakill were still putting everything they had into the game, but they needed to put a run of scores together, and Clough-Ballacolla just wouldn’t let them do that.

Cha Dwyer’s point with four minutes to go had them within four, but Clough-Ballacolla kiced for home from there, as they finished with four unanswered points to retain their place in the SHC for the time being.

It’s Rathdowney-Errill up next for them in the quarter-finals, while Ballinakill face The Harps in the relegation playoff.