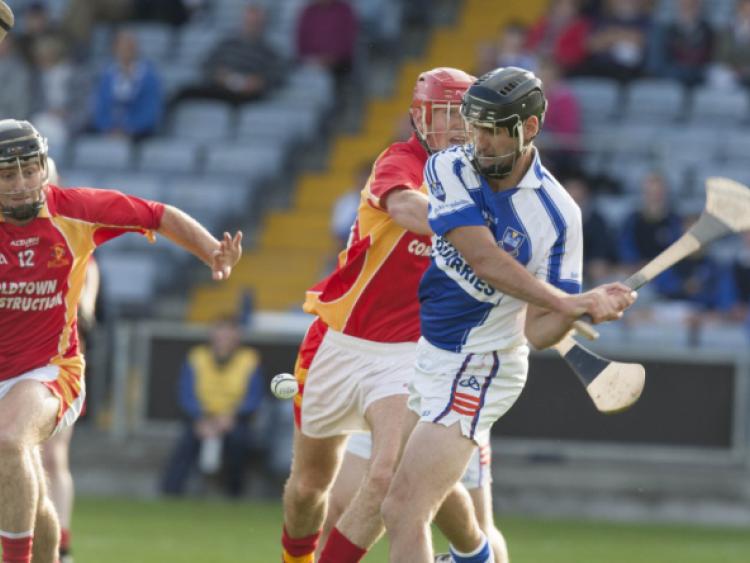 Castletown-Slieve Bloom maintained their interest in the Senior Hurling Championship with a victory over The Harps last Saturday night that was more comfortable than the final scoreline suggests at first glance.

Castletown-Slieve Bloom maintained their interest in the Senior Hurling Championship with a victory over The Harps last Saturday night that was more comfortable than the final scoreline suggests at first glance.

With four minutes to go Castletown-Slieve Bloom led by seven points and were in complete control of proceedings. To their credit The Harps never threw in the towel and they added two late goals from Pat Walshe and John Brophy to get within one but in truth they were second best on the day and are now in very real danger of being relegated from the top flight.

Castletown-Slieve Bloom bounced back well from their opening day loss to Rathdowney-Errill and, while they started slowly, they were always in control from the time David Cuddy headed home a goal after 25 minutes. That score put them seven points clear and while they sat back more in the second-half to defend their lead, a dangerous tactic at the best of times, they always looked to be in control of the game.

The Harps struggled to create scoring opportunities and found Paul Cuddy in vintage form at centre-back. Their first score from play came after 28 minutes and the two goals came too late to change the outcome of the game.

They did open the scoring with a minute on the clock with a free from Michael Lanigan but they would have to wait 21 minutes for their next score. In the interim Castletown-Slieve Bloom added five points an they could easily have had two goals to go with them.

It took until the 12th minute for them to open their account through Ben Conroy but with 14 minutes on the clock they twice came close to finding the back of the net.

Fionan Cuddy, Ben Conroy and David Cuddy added points before Michael Lanigan ended The Harps’ drought with a point on 22 minutes. Ben Conroy responded with a point from a free for Castletown-Slieve Bloom before David Cuddy’s headed goal put them seven points clear. A long ball in hit a well bottled up Cuddy on the top of the helmet and the ball somehow found its way into the bottom corner of the net.

The teams went score for score in the first 12 minutes of the second-half with points for The Harps from Michael Lanigan (2) and John Brophy being cancelled out by Brendan Reddin, Ben Conroy and David Cuddy. Brophy’s point could easily have been a goal but after Ger Cuddy saved from Pat Walshe, David Cuddy did brilliantly to cover his ‘keeper and tip the goal-bound shot over the bar.

Two points from frees from Ben Conroy put Castletown-Slieve Bloom seven ahead entering the final five minutes and they looked set to cruise home but The Harps never threw in the towel scoring two late goals to get back within one.

A kicked goal from Pat Walshe got them back within four and John Brophy pounced on an error in the Castletown-Slieve Bloom to add the second.

Unfortunately for The Harps, that was the last action of the game as Castletown-Slieve Bloom held on for a one point win.