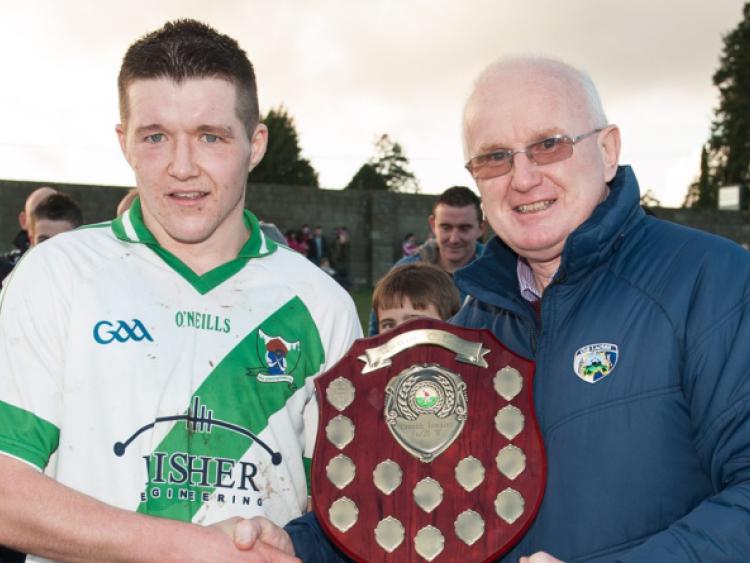 Rosenallis cruised to a big win in this U-21 B final on Saturday afternoon, as they had far too much for Clonad-Park Ratheniska in a one-sided affair.

Rosenallis cruised to a big win in this U-21 B final on Saturday afternoon, as they had far too much for Clonad-Park Ratheniska in a one-sided affair.

Fielding most of the team that got them to the SHC ‘B’ semi-final earlier in the year, Rosenallis were red-hot favourites coming into the final and they certainly lived up to the tag. After a closely fought opening quarter, they found their stride in the last ten minutes of the first half and never looked back from there.

It was a tough afternoon for Clonad-Park Ratheniska, whose defence was very impressive for much of the first half, but were simply over run in the end as they struggled for scores.

Rosenallis opened the scoring in the game with a point from Cillian Callaly, but Kieran Lennon quickly restored parity with a good score under pressure. Ronan Murray, Declan Walsh and John Lennon then pushed Rosenallis three ahead as they threatened to pull away, but two Darragh Nolan frees had Clonad-Park Ratheniska back within one after a little over ten minutes of play.

Patrick Keating and Gavin Tynan then traded scores from placed ball, but Rosenallis started to turn the screw after that. They were almost in for a goal in the 18th minute, but Kevin Bergin and Martin Norton did superbly to deny Patrick Keating a goal, but Keating them fired over a 65 moments later. John Lennon then scored a superb point from the left wing as the pace of Rosenallis’ game started to quicken up.

They added four more points before half time, with Callaly, Declan Walsh, Keating and Lennon all raised white flags to see Rosenallis hold a commanding 0-11 to 0-4 lead at half time.

Having taken control of the game at the end of the first half, Rosenallis then put the final result beyond doubt at the start of the second, as they got the first eight scores of the half. Ronan Murray opened that sequence, and Lennon, Brian Fitzpatrick and Declan Walsh, amongst others, got in on the act, before Patrick Keating’s long range free went all the way to the net to open up a 17 point lead.

Clonad finally responded with a free from Darragh Nolan, as that brought an end to a run of 1-13 without reply from Rosenallis, but there was no hint of a comeback, as John Lennon’s goal wrapped things up and Rosenallis rang the changes on their way to a comfortable win.