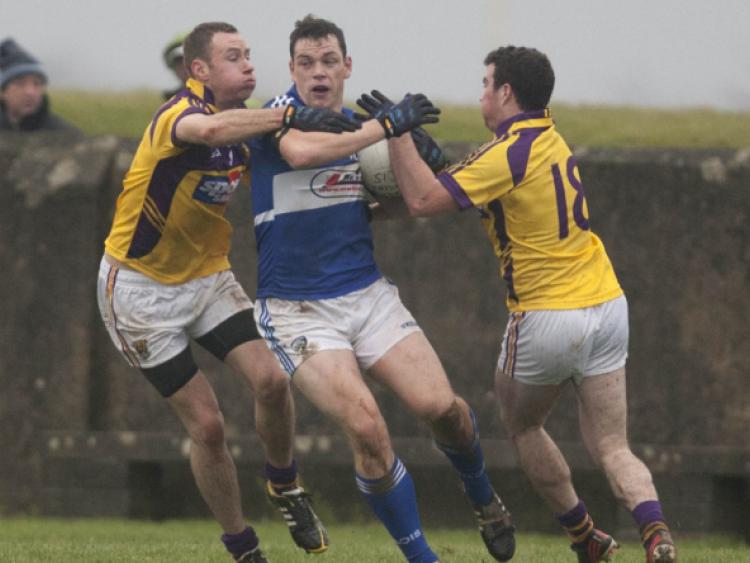 A scoring surge of 1-4 in seven minutes early in the second-half proved decisive as Wexford overcame Laois in their season opener in extremely difficult conditions in New Ross last Sunday.

A scoring surge of 1-4 in seven minutes early in the second-half proved decisive as Wexford overcame Laois in their season opener in extremely difficult conditions in New Ross last Sunday.

Having played well against the strong wind and rain in the first-half, Laois trailed by just four points and they had reduced the deficit to just one seven minutes after the restart. However Wexford responded with their decisive scoring burst to take the game away from the visitors and they closed out the win as both sides tired on the heavy pitch in the closing stages scoring just two points apiece in the final 20 minutes.

This was the first game in charge for new Laois boss Tomás Ó’Flatharta and while the result did not go his way, there were many positives to take from a performance that signalled a complete change in style as well as a change in management.

Playing without a number of injured players, including newly appointed captain Ross Munnelly, Laois fielded a new look side that showed 11 changes between personnel and positional from that listed in the programme.

Encouragingly, Laois showed far more attacking intent than they have in recent seasons with no extra defenders being dropped back. Wing-backs Adam Ryan and Peter O’Leary stood out in the first-half and lead charge with attacking runs while the full-forward line looked very dangerous when the ball came their way.

Portlaoise’s Graham Brody made three top class saves during the game and he had no chance with either goal with the first coming on the rebound after he had made one of his excellent stops.

With Wexford playing a two man full-forward line, Laois tried to mark them man to man but they struggled in their full-back line where Paul Begley and Stephen Attride were given a tough afternoon by the lively duo of Ciaran Lyng and Kevin O’Grady. After breaking even in midfield in the first 35 minutes, Laois were overpowered after the restart and at one stage lost six of their own kick-outs in a row.

Overall however it was a good early season workout for Tomás Ó’Flatharta’s charges as the new manager settles into his new job and sets about moulding his team for the league and championship ahead.

Playing into the teeth of the wind and the driving rain in the first-half, Laois were quickly off the mark with David Conway pointing after just 20 seconds after being put through by James Finn.

Colm Kehoe equalised a minute later for Wexford but Laois were back ahead with five minutes on the clock when Conor Meredith converted a close range free.

Ciaran Lyng equalised for Wexford soon after and with nine minutes on the clock, the same player cut through the Laois defence before unleashing a powerful shot that was well saved by Graham Brody. Unfortunately for the ‘keeper, the lose ball fell to the feet of Kevin O’Grady and his first time shot off the ground found the bottom corner of the net. A point from Ben Brosnan followed as Wexford moved 1-3 to 0-2 ahead after 10 minutes.

Playing a more attacking style, Laois responded well with points from a free from Conor Meredith, one from Damien O’Connor and a well taken score from David Conway after good build up play out the field. Ciaran Lyng and the all action Adam Ryan exchanged points to leave one between the sides entering the closing minutes of the first-half. With the wind behind them, Wexford closed out the half well hitting three unanswered points, one of which should have been a goal but O’Grady blasted over from close range.

With the elements in their favour, Laois came out strongly after the break and three pointed frees from Donie Kingston got them back within one. They were in a strong position at this stage and should have pushed on but Wexford responded with a seven minute blitz that produced 1-4. Laois couldn’t clear their lines as Wexford won possession from each kick-out after they scored and the burst culminated in a goal for Kevin O’Grady who roofed the ball past Graham Brody from close range after getting past Paul Begley close to goal.

That left Wexford 2-11 to 0-9 ahead and they extended their lead to nine soon after when James Holmes became the sixth Wexford forward to score from play.

With darkness descending and with both sets of players visibly tiring in the miserable conditions on the heavy pitch, only three further points were added with Conor Meredith and Evan O’Carroll finding the target for Laois.

There were goal opportunities at each end but Graham Brody did well to deny Graeme Molloy while Conor Meredith’s goalbound shot was deflected away for a ‘45 by Shane Roche.

There was also time for the newly introduced black card to rear its head when Wexford’s Ciaran Lyng was the recipient after an off the ball scuffle with Paul Begley.