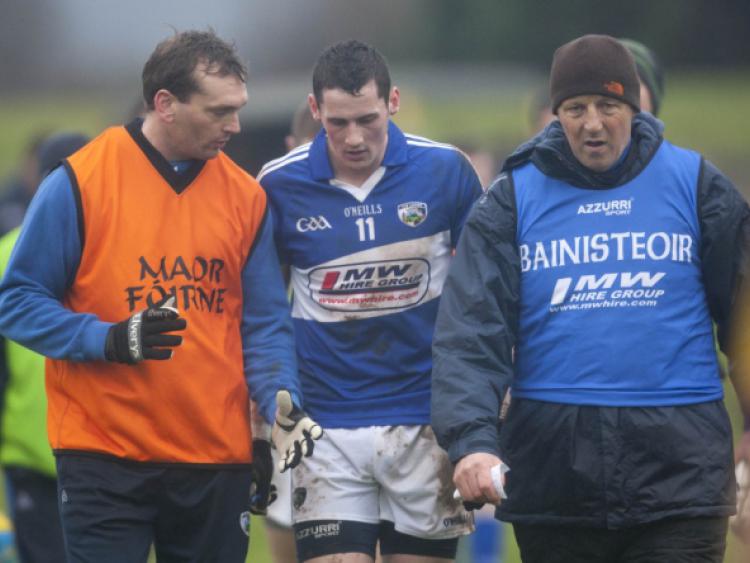 Despite an encouraging first-half display against the strong wind, Tomás Ó’Flatharta’s reign as Laois manager began with a defeat away to Wexford on Sunday but the manager was not overly concerned with the early season result.

Despite an encouraging first-half display against the strong wind, Tomás Ó’Flatharta’s reign as Laois manager began with a defeat away to Wexford on Sunday but the manager was not overly concerned with the early season result.

Speaking after the game that was decided in a seven minute spell in the second-half where Wexford scored 1-4, the new boss remarked that he was happy with how things were going while hoping for improvement in the games ahead.

“It’s going good so far. It’s early days still. We’re only together about a month or so and I’m just getting to know the lads still and we need more games together. That was our first game today. We have another game on Wednesday against Offaly and another one on Sunday against UCD so hopefully they’ll bring us on. Hopefully we’ll be able to put in a better performance on Wednesday night.”

The notable difference from recent years was in the tactics employed by the manager who explained that he prefers to play a more attacking style of football.

“We were attacking. That’s the way we’d like to play it. We’ll play plenty of attacking football but you have to get the scores at one end of the field but along with that you have to defend as well at the same time so we’ll be working on that.

“I suppose the lesson from today is that we have plenty of improvement to do but it’s only the first week in January and you can see we’re still very rusty. In fairness you have to give credit to Wexford. They did very especially in the second-half. We kept with them in the first-half but they had most of the play in the second-half.”

Laois played well into the teeth of the wind in the first-half and Ó’Flatharta was happy with how his side performed in the opening 35 minutes.

“In the first-half I was pleased enough. I thought the full-forward especially were moving well. When we left early ball into them it yielded scores. There was some good support play as well and we were well organised in defence in the first-half I thought but in the second-half they just got on top, especially around the middle of the field.”

The manager’s hand will be strengthened before the league campaign with a number of influential players close to returning from injury while Paul Kingston, who I splaying with UCD in the O’Byrne Cup will also be back in contention .

“Denis Booth has been out for a good while and we hope to have him back. Paul Cahillane is carrying an injury as well but he should be back pretty soon. Ross Munnelly is about another three or four weeks away. Conor Boyle has had to go for more repair work so he’s going to be out for a good while,” commented Tomás Ó’Flatharta.

Laois play twice this week with Offaly up first in O’Moore Park on Wednesday evening at 7.45pm while on Sunday they will play UCD in McCann Park in Portarlington at 2pm.

Also this Sunday, the Laois hurlers get their season underway when they host the students of NUIG in the first round of the Walsh Cup at 2pm in Rathdowney.