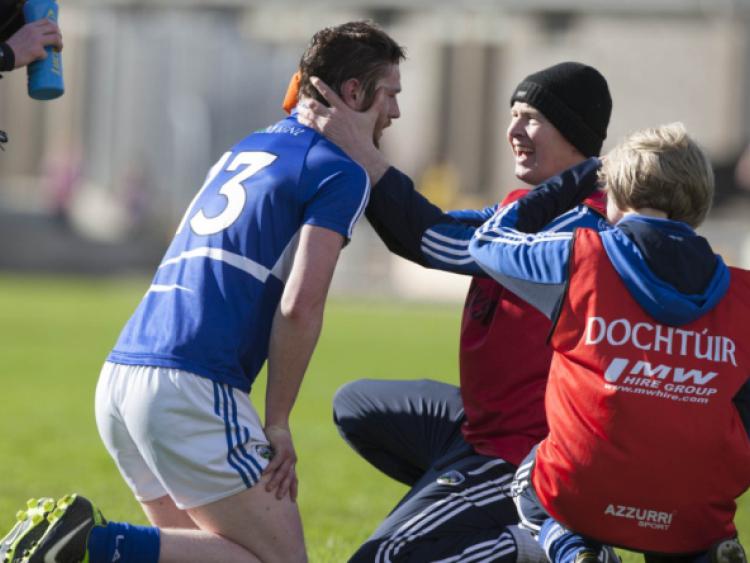 Laois manager Seamas Plunkett praised the effort of his team, as they put in a fine battling display which unfortunately yielded no reward in Sunday’s game with Wexford.

Laois manager Seamas Plunkett praised the effort of his team, as they put in a fine battling display which unfortunately yielded no reward in Sunday’s game with Wexford.

Laois played the entire second half with 14 men and still managed to draw level with the hosts on two occasions, before eventually losing out by six points.

When asked afterwards if he was happy with the nature of the Laois performance, the Portlaoise man was full of praise for the battling qualities of his players. “It’s a feature of this team, and I would like to think it’s a feature of all Laois hurling teams, you fight for absolutely every single ball, no matter what side of the pitch it’s on, and when you’re in that mindset you have a chance in a hurling game, and I think we’re getting that as we go along.

“We might not have it every day, but we certainly did have it today and I think you couldn’t look at any player today and say he didn’t give it everything.

“That’s not to say it worked out for everyone, but that’s the nature of hurling, some times the ball will flow for you, some times it won’t, but I have to be really impressed with all the team today, they gave everything they had and there wasn’t much in it in the end.”

While Plunkett admitted to being happy with the mindset, he was quick to point out that winning is still the name of the game. “We’re not here just to applaud effort either, we’re here to win things.

“I want to make that particularly clear, and I will make it clear to the team. We’re not coming down to the Wexford Park’s of this world just to partake in matches and give them practice matches, we’re coming down here to win things, so I would be taking that from the game.

“I recognise the hard work of the players, but I would also recognise there was a game here for us to win today and we didn’t win it, and I need to look at how we are going to win these games in the future.”

It’s Limerick up next now, and Plunkett is hopeful of finishing the league phase with a win. “It’s going to be another cracking game, we’re going week-on-week here, these are the matches to be looking forward. We’re all hurling people, why wouldn’t you want to be playing every Sunday, we’re looking forward to it and we’ll welcome Limerick as Munster champions into O’Moore Park.

“After that the respect will finish, we’ll be tearing into them, and please God a couple of little things can go for us and we can get a result, but one way or the other we are in a league quarter-final the following Sunday after that.”