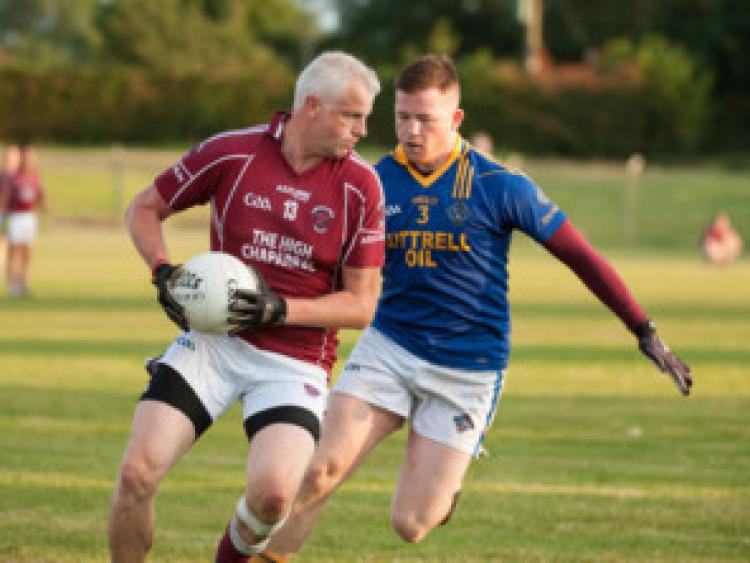 Despite trailing by two points at half-time, Annanough managed to claw their way back and secure a one point win in their opening game in the championship against a determined Kilcavan side last Wednesday.

Despite trailing by two points at half-time, Annanough managed to claw their way back and secure a one point win in their opening game in the championship against a determined Kilcavan side last Wednesday.

Centre-back John Scully was the hero for Annanough starting and finishing the move that led to the winning score one minute into injury-time.

After dominating for much of the first-half with Gordon Lawlor and Derek O’Connell to the fore, Kilcavan struggled to break down the Annanough defence in the second-half and were guilty on occasion of overplaying the ball and losing possession instead of taking their scores.

Annanough were quickly out of the blocks as a heavy shower blew across Pairc Acragar in Mountmellick and were 0-3 to 0-0 ahead after just eight minutes through points from Steven Miller, James Miller and Simon Miller. Last year’s Junior champions, Kilcavan, were struggling to settle into the game but as the skies cleared, they almost opened their accountwith a goal after 11 minutes but Gordon Lawlor flashed his shot wide of Declan Fenlon’s post.

The opportunity sparked Kilcavan into life and they outscored their opponents by six points to one in the closing 16 minutes of the half . Pat Hunt opened their account after 14 minutes with scores from Gordon Lawlor and Derek O’Connell drawing them level.

After struggling to keep pace with Kilcavan in the second quarter of the game, Annanough were far better organised on the resumption and within seven minutes were level with a Dan Carroll free and a point from Ed Stynes drawing them level.

Derek O’Connell edged Kilcavan back in front for the final time after 40 minutes but that would also prove to be their final score as Annanough pushed on to grind out the win.

Substitute Cyril Darcy levelled matters on 47 minutes setting up a nervous final quarter as both sides created but wasted very scoreable chances. Players became visibly nervous and there was a reluctance to shoot on both sides until John Scully took the initiative to score the winning point.

He win possession on his own ‘45 one minute into injury-time and took off up the field. He played a precise one-two with Darren Hennessy deep inside the Kilcavan half before putting the ball over the bar. Kilcavan had one final attack to try and snatch a draw but it came to nought as Annanough held on for a crucial, if somewhat win.