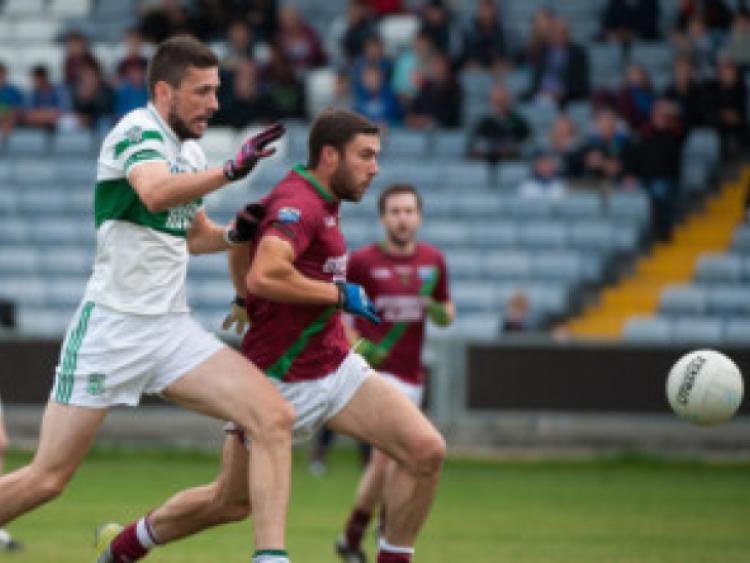 Two goals by Portlaoise in the opening fifteen minutes left Portarlington with a steep hill to climb in the Division 1 League final on Friday evening.

Two goals by Portlaoise in the opening fifteen minutes left Portarlington with a steep hill to climb in the Division 1 League final on Friday evening.

Both teams had impressive league campaigns, particularly Portarlington who emerged early on as favourites to make the Division 1 final for the first time in 21 years. On the other side of the draw, Portlaoise were hungry to get back into the form of their Leinster campaign last year and went into the game eager to prove a point, having suffered their only league loss to Portarlington in May.

With this in mind, the stage seemed set for an epic encounter between the two rivals however the game failed to take off and Portlaoise ultimately did only enough to secure victory.

Portlaoise’s Adrian Kelly won the throw up and worked it into the forward line where Paul Cahillane scored the game’s first point within seconds of the start after a pass from Brian McCormack.

Portarlington went on the attack immediately with Stephen O’ Neill getting fouled and Shane McAuley kicked the free between the posts. There was very little between the sides in the opening ten minutes. Cahillane popped the ball over the bar after good play from Stuart Nerney but two points from Portarlington’s impressive Adam Ryan, including one point kicked under immense pressure from Conor Boyle and Eoghan Whelan in the Portlaoise half back line, put the Portarlington men ahead after nine minutes.

This was to be the only time Portarlington would lead in the game however and it would be their last score until the seventeenth minute, as Portlaoise kicked it up a géar. The dominant Brian McCormack kicked the first goal of the game in the eleventh minute after a poor kick out from the Port goal keeper was intercepted by the Portlaoise forwards. Cahillane followed this up four minutes later. Ricky Maher laid the ball to him and Cahillane’s deadly left foot kicked into the bottom right corner.

A point each from Gareth Dillon and Adrian Kelly left Portarlington trailing 2-6 to 0-3 after Portlaoise’s five minute scoring blitz where their quick passes and support play was impressive to watch.

Credit to Portarlington they persevered with Cathal Ryan coming up from centre back to send the ball over the bar. Portlaoise suffered a loss in the twenty-third minute with Adrian Kelly going off injured and this changed Portlaoise’s dominance in midfield.

Portarlington capitalised on this and David Murphy caught some great ball in the full forward line, setting up Shane McAuley and Brian Cleary for scores before the half ended, leaving their side still trailing 2-7 to 0-8.

Portarlington started the second half strongly and Eoghan Gleeson opened the scoring with a well taken ’45. Portlaoise’s Stuart Nerney sent a quick ball into Paul Callihane in the full forward line and he kicked his side’s first score of the second half in a similar fashion to the opening score of the game.

Brian McCormack added a point two minutes later after good support play by Gareth Dillon. Portarlington’s defending was considerably tighter in the second half with Jonathan Fullam and Cathal Ryan particularly notable. Portarlington continued to press on but their poor passing at times out did any good movement, with many 50/50 balls being kicked into their forwards rather than utilising a straightforward pass.

In addition to this, Portarlington’s kickouts often dropped short and with the accuracy of the Portlaoise full forward line, Portarlington were punished. An instance of this happened in the fortieth minute where, only for a phenomenal save by Portarlington’s ‘keeper Brian McAuley, Portarlington would have found themselves trailing by more.

Portlaoise’s Craig Rogers and Dean Cullen kicked some lovely points and down the other end David Murphy and Chris Booth scored for Portarlington.

The atmosphere in the second half very much felt like Portlaoise had done just enough to win and didn’t push on any further. Portarlington’s only goal chance came in the 55th minute but Kevin McGrath and Colm Murphy both saw their shots blocked by Michael Nolan and carried down the field by Portlaoise with Stuart Nerney eventually kicking if over the bar, in a move which involved most of the Portlaoise team.

Portarlington’s Kevin McGrath and David Murphy kicked over consolation points as the game drew to a close and confirmed what had been predictble since the 15th minute.