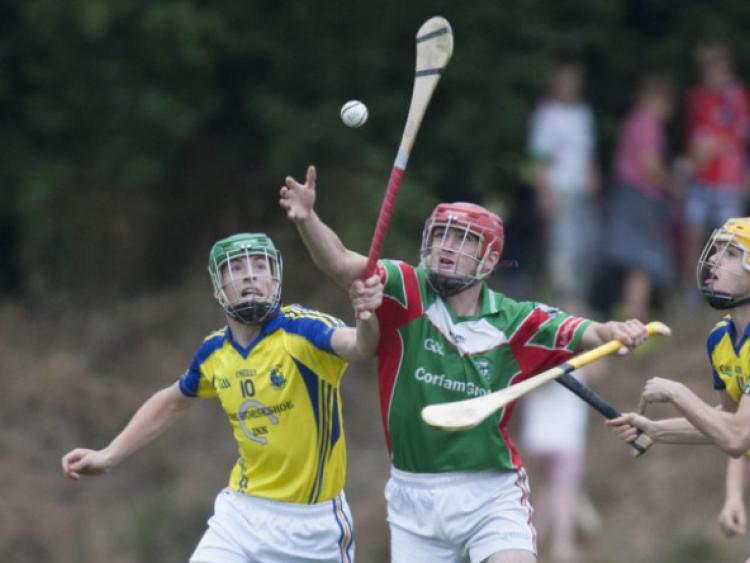 Rathdowney-Errill powered to a twelve point victory over Abbeyleix Gaels in Shanahoe on Monday last to claim the Minor League title.

Rathdowney-Errill powered to a twelve point victory over Abbeyleix Gaels in Shanahoe on Monday last to claim the Minor League title.

Rathdowney-Errill had put up some impressive scores on their way to the final including 5-15 against Na Fianna and they continued in that vein in Shanahoe. Mark Kavanagh was the star of the show scoring 2-6 with 2-4 of that total coming from play while they had seven scorers in total as they saw off the challenge of a talented Abbeyleix Gaels side who came into the final off the back of an impressive 3-14 to 2-16 win over Borris-in-Ossory/Kilcotton in a thrilling semi-final.

In the group games they put up also put up big scores including 4-23 against Camross and it looked good for them in the opening minutes on Monday as they opened the scoring with Dan Egan sending over the first point of the day after just a minute of play.

However Rathdowney-Errill replied emphatically with 1-1 from Mark Kavanagh, with the goal coming first, to send them into the lead after ten minutes.

Abbeyleix Gaels replied after twelve minutes thanks to a Rory McEvoy point, but Rathdowney-Errill went straight back on the attack and added a further two points from Brendan Kelly and Jack Kelly to push their side into the lead once again.

Abbeyleix Gaels continued to push forward and replied with their last score of the half after eighteen minutes with a Jake Cranny point.

Rathdowney-Errill dominiated the closing minutes of the half and stormed into the lead with a brace of points from Mark Kavanagh and two from Jack Kelly to see Rathdowney-Errill leading by seven points at the interval.

It looked like any doubt over the result was removed shortly after the resumption when Mark Kavanagh goaled for Rathdowney-Errill but Abbeyleix Gaels refused to throw in the towel and Callum Mullen notched two points for them to keep the gap down to managable proportions.

At the other end however, Rathdowney-Errill kept the scoreboard ticking over with Jack Kelly, Shane Madden and Mark Kavanagh all pointing to push Rathdowney-Errill into an eleven point lead approaching the final twenty minutes.

Callum Mullen kept Abbeyleix Gaels in touch with two points, and Rory McEvoy lifted the white flag too, but Rathdowney-Errill kept pressing the Abbeyleix defence with Jordan Kavanagh, Liam O’Connell, Conor Madden and Philip Bergin all adding points for the eventual winners on route to a deserved twelve point win to see them claim the title.