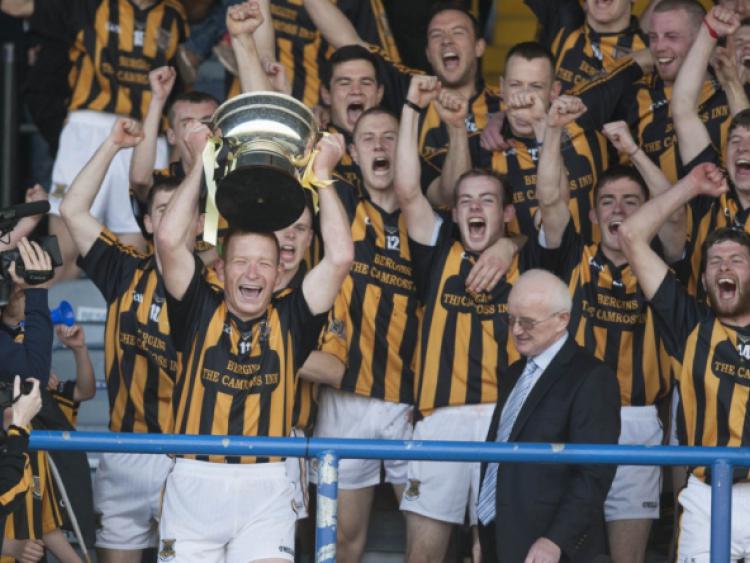 Camross captain Tomas Burke was bristling with pride as he lifted the Bob O’Keefe Cup after Camross’s win over Borris-in-Ossory/Kilcotton.

Camross captain Tomas Burke was bristling with pride as he lifted the Bob O’Keefe Cup after Camross’s win over Borris-in-Ossory/Kilcotton.

As the celebrations started to get into full swing on the field in O’Moore Park after the game, Tomas explained that team work was one of the keys to their success.

“I can’t believe it really. There was a great effort all year and thank God it paid off. We’re delighted to win it. We got lucky on the day though at times but our young lads came through for us and fair play to them. They’ve been doing it all year. We proved all year we’re a hard working team, not just a one man team like everyone thought. Fair play to them boys. This is for the whole panel of 30. You wouldn’t win county finals with 15 or 16, you win it with a panel.”

He was also full of praise for the management team.

“The back room team of Arien, Fran and Peter Dooley are great Camross men. They deserve great respect for what they did and where they got us too considering where we were last year. Fair play to them.”

Camross received support from far and wide ahead of the game and the captain was in no doubt as to how important it was to have everyone behind them.

“It was for everyone and for the lads abroad. We had a meeting last night and a half a team abroad were wishing us the best of luck. They couldn’t be here. They’re working abroad because they’ve no work here. We did this for them as well. Fair play to them. They backed us 100%. They said we could do it, they believed in us and they told us to go on and bring Bob O’Keefe back to where it belongs.”

Camross went through the campaign unbeaten and Tomas noted that on different days, different players stood up to the mark.

“Even when we go to practice matches some people have good days and other people have bad days but they’ll still work. They’ll still throw out the ball to the man in the best position. This is all about a team. Zane got man of the match today. Fully deserved. Great hurler. Best hurler in the county but he’ll tell you himself it’s down to a team effort. Everyone drove it on this year and thanks be to God we brought it home.”

Borris-in-Ossory/Kilcotton trailed by six at half-time but came back strongly at the start of the second-half. Tomas Burke said Camross’ belief in themselves never wavered but he did think that the bounce of the ball went their way.

“They believed they could win and we believed that we could win. In fairness we got the lucky breaks on the day, the couple of goals fell our way. Another day that mightn’t work out. Borris were unlucky in a way but we got the luck on the day and that’s the way it goes. We were here in 2010 and we got beaten. They’ll learn from that but hopefully we’ll be back next year again to try and do a double on it.”

While he praised the efforts of the younger players, the captain also outlined how important it was to have players who had been in a county final before.

“We’ve been through this before. We’ve lads there like Peter Guilfoyle, Damien Keenan, Tadhg Doran, Malvin Maloney, all those lads who have years of experience. Fran Hogan on the line, years of experience. You can’t beat that and that’s what won it for us on the day. We had the experience and we knew we had to grind out a result. Finals aren’t about playing well, they’re about winning the game.”

From start to finish, Camross were cheered on by their large and vocal support. Tomas Burke took the opportunity to pay tribute to Camross’ ‘sixteenth man’.

“There’s great supporters in Camross, always have been. They’re like our sixteenth man. Always have been. They gave us great belief in ourselves all year. Even down training they come and cheer us on. There’s bunting up all round the place. You don’t see it because it’s in the country but there’s flags up everywhere. Everyone’s delighted for us and thank God we brought it home.”