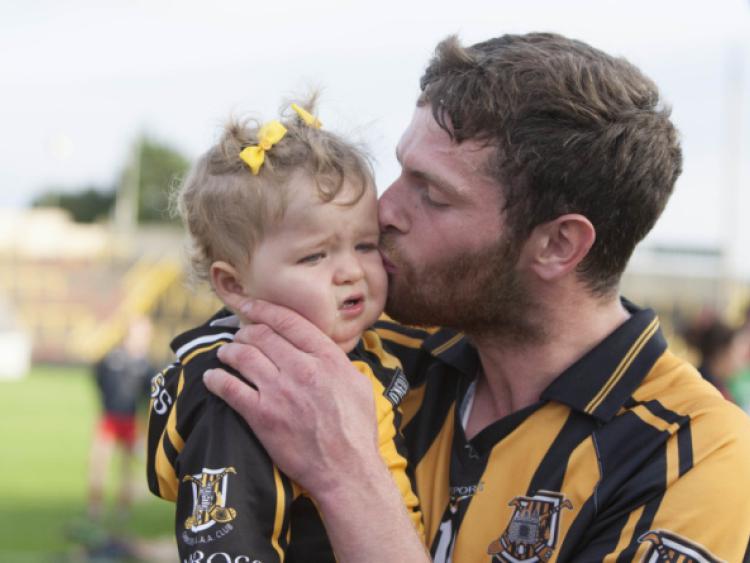 Like most other clubs in Laois and across the country, Camross have suffered heavily due to players emigrating to far flung corners of the world.

Like most other clubs in Laois and across the country, Camross have suffered heavily due to players emigrating to far flung corners of the world.

However in the case of Camross, while the players in question were not with their team-mates on the field on Sunday to help in the game itself, they did play a major part in motivating those in the black and amber to victory.

Speaking after the game, a clearly emotional Zane Keenan explained how the Camross team had been given an inspirational message the night before the game from their absent friends.

“We had to dig deep this year and we’re after losing a lot of players. A special, special thing happened last night. We had our meeting and words couldn’t describe what happened. There’s 11 boys gone off our team at the start of this year and they all got together in Australia, in America and in Dubai and they all did a video for us to wish us the best of luck. It was unbelievable. It went on for five or six minutes. It was one of the best things that anyone could ever do. Words can’t describe it. It was deadly so it was. There’s pictures of lads in the arsehole of nowhere in Australia with flags and Camross jerseys on them on Facebook but everyone was saying that words can’t describe what happened last night at that meeting. It got everyone going. We won it for them boys out there and we won it for out parish and we won it for our friends and we won it for our family and ourselves.”

This was Camross’ first senior title since 2007 and the Man of the Match is going to make sure he enjoys it.

“We’ll savour this because when I came on the team first, I thought we were going to win everything. But they don’t come around too often and we’ll work hard from here on in.”

While the support from abroad gave Camross a major lift the night before the game, the support locally has been just as important as Keenan explained.

“I seen a sign coming from Camross saying ‘last one out turn out the lights’. That’s what it means. Everyone gets behind us. There’s about two or three hundred flags up. Every road you go in Camross there’s flags, there’s signs, there’s banners. People who don’t really be into hurling get together on County Final day and give us a lift when we need it. Borris-Kilcotton came back there on us after half-time and they hit 1-2 with no reply and got it back to a point. But the crowd got behind us and we dug deep and we got a goal and got a few points and drove it on from there again.”

Camross needed all the support to drive them on near the end of the game as the match hung in the balance right up to the final whistle. Zane Keenan said he would have preferred to have been further ahead but in the end he didn’t care what the final margin was.

“I’d rather have been six or seven points up than two or three but they’re the type of games that you live and die for. The boys were saying it would’ve been great to win by seven points, better than winning by one but you don’t mind what you win by as long as you win the game.”

The game was also a great advert for Laois hurling in what has been a memorable year at club and inter-county level. While there was no quarter asked or given for a blistering hour of hurling, there was not one dirty stroke as the two team went all out for the win.

“They were two teams that went out and wanted to win that final and didn’t want to do any bad stuff. There could’ve been only one yellow card and that was for nothing either, maybe persistent fouling but it was a great game for us anyway.”

Zane Keenan also gave an insight into the strength of the Camross squad and the unity in the dressing room.

“We have a panel of 29. They all don’t get a look in but before the game they all came around and had a chat with us to say if you need us, we’re there. That’s the kind of people you want in a dressing room with you. You don’t want lads coming in, putting on the gear and sitting down in the stand. Them boys are more passionate on that team than anyone.”

He also paid a glowing tribute to the management team.

“We were prepared well for the championship this year. We’ve great men over us, Arien Delaney, Fran Hogan and Peter Dooley. Three fabulous men and they know what they’re at. He’s one of the best trainers that anyone could have. He’s up there with the best so he is. The stuff he does is unbelievable. And Fran Hogan is one of the best men to get a team going for a match. Peter Dooley could come out with anything. He’s one of the maddest lads you could ever come across but he’s the best lad so he is.”