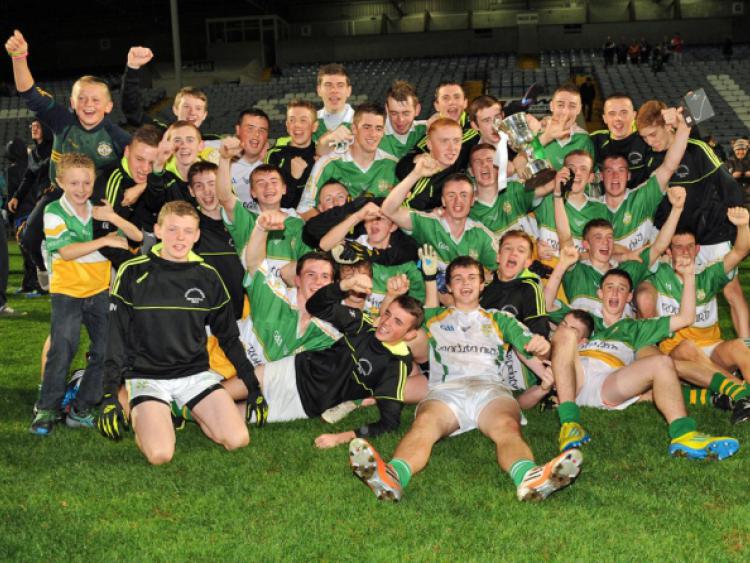 A four-goal, five-star performance from Killeshin-Crettyard ensured that they captured the minor football championship in O’Moore Park on Saturday night.

A four-goal, five-star performance from Killeshin-Crettyard ensured that they captured the minor football championship in O’Moore Park on Saturday night.

In what was a high quality, high octane encounter, the men in green, yellow and white’s ability to find the net at decisive times was the difference between the sides.

St Joseph’s Barrowhouse played their part in what was one of the more memorable finals in recent years, but came up short and it was Killeshin-Crettyard who were deserving winners on the night, winning out on a scoreline of 4-12 to 0-10.

Killeshin Crettyard were first off the mark in the opening minute through a Cormac Murphy free. St Joseph’s Barrowhouse responded well hitting three scores on the run, James Baldwin, Lir McDonald and an excellent solo effort form Danny Hickey giving his side an early 0-3 to 0-1 lead.

Killeshin-Crettyard were unlucky not to raise a green flag when Eoin Lowry crashed off the post in the twelfth minute. Conor Kealy stretched his side’s early advantage with a well taken point a minute later.

David Aston reduced the gap for the men in green, yellow and white on the quarter hour. St Joseph’s Barrowhouse were now growing in confidence and hit two back-to-back scores in the eighteenth and twentieth minutes, Jack Higgins and a Brian Daly free raising the white flags to give St Joseph’s Barrowhouse a 0-7 to 0-3 lead heading in the final ten minutes of the opening period.

Killeshin Crettyard seemed to sense the game might be getting away from them and cracked into gear as the first half drew to a close.

A David Aston free and ‘45 reduced the gap to two before the first green flag of the game was raised.

Killeshin Crettyard’s Aaron McGrath sent a searching ball into the square and found Laois senior star Evan O’Carroll who showed a lovely touch to flick the ball across to Eoin Lowry who expertly punched the ball to the back of Aaron Cooney’s net on the stroke of half time.

St Joseph’s Barrowhouse were quickest out of the blocks in the second half with Michael Kehoe pointing inside the first minute to level affairs 0-8 to 1-5.

Killeshin Crettyard were staring to get a hold on affairs with the likes of Evan O Carroll and Eoin Lowry now coming more and more into things.

Their second goal in the thirty fifth minute was evidence of this. Again it was an Aaron McGrath long ball which keeper Aaron Cooney failed to deal with and Conor Doyle, who had just come on, made no mistake and crashed the breaking ball to the net to give his side a 2-7 to 0-8 lead.

Killeshin Crettyard were firmly in the ascendency now, and they made it count with a game-clinching third goal in the forty third minute to really put the game to bed. Eoin Lowry showed sublime touches to carry from midfield before drilling past Cooney.

Killeshin Crettyard were now beginning to run away with things leading 3-8 t0 0-9 entering the last quarter.

Cormac Murphy added a fourth goal on the fifty minute mark to cement victory. David Aston and Lowry were on hand to score excellent individual points to bring proceedings to an end.

St Joseph’s Barrowhouse Noel Leech let his frustration get the better of him and saw red in the dying seconds for a strike on Lowry, but it had no consequence on the end result with Killeshin Crettyard running out deserving 4-12 to 0-10 winners.