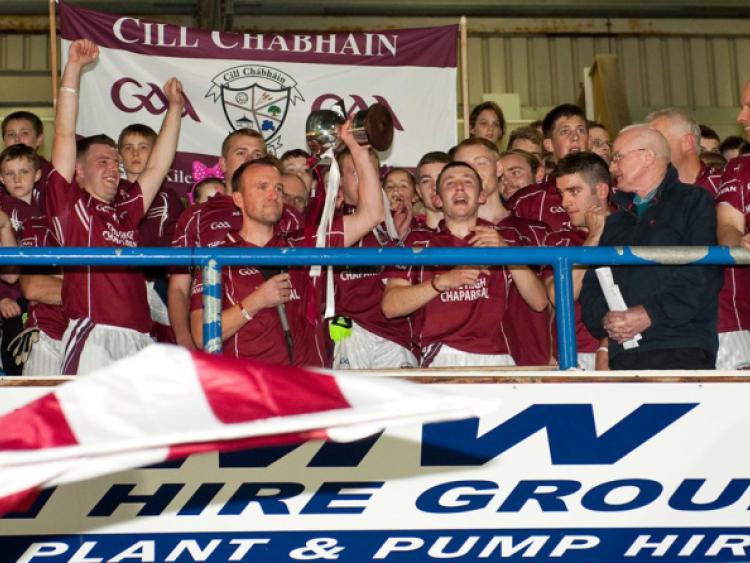 Seven goals, two penalties, one of which was saved, a sending off, and a hat-trick from man of the match Michael Tarpey were just some of the highlights of a highly entertaining and totaly unpredicatable Junior Football Final in O’Moore Park.

Seven goals, two penalties, one of which was saved, a sending off, and a hat-trick from man of the match Michael Tarpey were just some of the highlights of a highly entertaining and totaly unpredicatable Junior Football Final in O’Moore Park.

After 13 minutes, eventual winners Kilcavan were in deep trouble as they trailed by 1-4 to 0-0 and were struggling to get any foothold in the game. They battled back before half-time and were just a point adrift at the break but their captain John McEvoy was sent off just 47 seconds after the resumption and again their chances of landing their fourth Junior title looked to be slipping away.

Incredibly the 14 men took complete control of the game led by target man Tarpey outscoring Courtwood by 3-3 to 0-2 in the next 20 minutes.

Courtwood almost staged a dramatic late comeback of their own scoring 1-1 through Niall Donoher while Andrew Mulhare also hit the underside of the crossbar, but their receovery came too late to change the outcome of the game.

Early in the game it looked like there was only going to be one winner as Courtwood blasted out of the blocks but, in front of there large and very vocal support, Kilcavan clawed their way back into the game. They were helped along the way when they were awarded a penalty when the foul seemed to be committed well outside the large rectangle but there was no question over their resilience in the second-half when they blitzed Courtwood despite being reduced to 14 men.

At first glance the sending off of John McEvoy looked a little on the harsh side. He was running towards a lose ball at full speed with Niall Donoher running the other way. Donoher got to the ball first and touched it past McEvoy. The Kilcavan man did appear to raise his shoulder slightly as Donoher went past and while contact was made, it looked more like a reflex action from McEvoy rather than an attempt to take out the Courtwood man. As it turned out however, the sending off worked in Kilcavan’s favour as they upped their game while Courtwood never got any benefit from their man advantage.

Early in the game, Courtwood had no problem getting scores on the board as they raced out to a 1-4 to 0-0 lead. Points from Colm Wilson, Dan Lutrell Paddy Wilson got them going before a mix up in the Kilcavan defence gifted a goal David Duffy. Niall Donoher tacked on another point and with just 13 minutes gone, Courtwood seemed to be in complete control.

Two points from the electric Ronan Gorry and one from Oliver Dixon got Kilcavan back into the game and after a point from Courtwood for Colm Wilson, Gorry pounced on a rebound and slotted home to get Kilcavan back within two. Paddy Wilson extended the advantage to three but just ten minutes after they were seven points behind, Kilcavan were level when a penalty was awarded for a foul on Derek O’Connell despite the fact that the foul looked to be clearly committed outside the large rectangle.

Michael Tarpey’s initial effort was brilliantly saved by Thomas Beehan but the ball broke kindly for Tarpey and he made no mistake with his finish to the back of the net. A point from Dan Luttell put Courtwood 1-7 to 2-3 up at the break and they received what should have been a further boost straight after half-time when Kilcavan’s John McEvoy was sent off. Dan Luttrell pointed the resulting free but by the time Courtwood scored again 18 minutes later, they were four points behind.

Michael Tarpey started the scoring run with a well taken goal and points from Oliver Dixon (2) and Sean Mangan left Kilcavan 3-6 to 1-8 ahead. Michael O’Connell briefly stopped the rot for Courtwood with a point but a goal from the penalty spot from Tarpey after he was fouled and another from Ronan Gorry after Tarpey’s effort came off the crossbar put Kilcavan nine points clear with seven minutes remaining.

Dan Luttrell and Oliver Dixon exchanged points and while Niall Donoher scored 1-1 in the closing minutes and Andrew Mulhare hit the underside of the crossbar, it was too little too late for Courtwood.