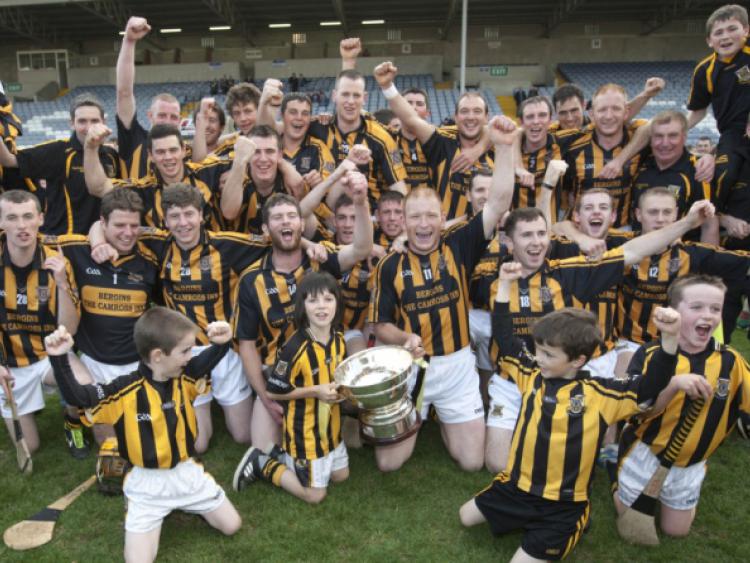 Camross secured their 24th Laois SHC title on Sunday evening in O’Moore Park, as Zane Keenan inspired them to a three point win over Borris-Kilcotton.

Camross secured their 24th Laois SHC title on Sunday evening in O’Moore Park, as Zane Keenan inspired them to a three point win over Borris-Kilcotton.

The most successful club in Laois club hurling took control of the game early in the second half, an apart from a ten minute spell after half-time, always looked the likely winners. Indeed, they could have won by more, as the finished with 16 wides, with nine of those coming in the first half.

Borris-Kilcotton looked a little over-awed by the occasion for much of the first half, as they struggled to piece together cohesive spells of hurling. It was a bitterly disappointing end to the year for them but it will be a massive learning experience too, and it would be no great surprise to see them back here next year.

For Camross, it was a deserved win achieved with a scattering of exciting young players across their team. Six of their starting team were 21 years old or younger, with Dwane Palmer scoring 1-1 and Gearoid Burke dominating the centre-back position.

The real star of the show, however, was Keenan, who orchestrated the win from midfield. He was as reliable as ever from frees, scored one outstanding point from play, had a hand in setting up both goals, and used possession really well almost every time he got it.

He was the big players for the big occasion, and Camross needed him after Borris-Kilcotton had made an ideal start. Ciaran Comerford floated over a free with 43 seconds gone, and Colm Stapleton followed that up with a point from the right wing a minute later as Borris-Kilcotton hit the ground running.

Camross eventually hit back when Zane Keenan pointed a free from the right wing, and he added another from 45 yards out soon after.

Ciaran Collier then scored a wonderful point from distance as Camross started to feel their way into the game, but another Comerford free had the teams level at 0-3 each after the opening ten minutes of play.

From that point to half time, however, Camross took control. It started with a free from Zane Keenan, as he pointed from his own 45 yard line, before he then went on a marauding run down the right wing and scored a wonderful point from play.

With momentum now gathering behind them, Camross made it count with the first goal of the game. Zane Keenan launched a long ball into the Borris-Kilcotton penalty area, and it broke kindly for Dwane Palmer, who whipped the ball to the net from 12 yards out.

Another Keenan free saw Camross hit 1-3 without reply. Ciaran Comerford and Patrick Whelan responded for Borris-Kilcotton, before Keenan cracked a 21 yard free just over the bar. Comerford again responded from a free, but Camross had the final say in the half as Aaron Moore and Dean Delaney pointed in injury time to leave Camross 1-9 to 0-6 ahead at the break.

Borris-Kilcotton needed to snap out of their torpor in the second half, and they were quick out of the blocks on the restart as Patrick Whelan had the ball sailing between the posts after just 20 seconds.

Buoyed by that score, Borris-Kilcotton struck for a goal soon after, but their was an air of fortune about it. A ball in from Colm Stapleton was fumbled by Tadgh Doran, and Robert Jones was quickest to react as he bundled the ball across the line from close range.

Borris-Kilcotton then introduced Neil Foyle as their supporters found their voice, and a free from Comerford had them back within one after just five minutes of play.

The next score would be crucial, and it was Camross who got it, when Zane Keenan pointed a free. Aaron Moore followed that up with a point from distance as Camross settled back down, and they struck for their second, crucial goal soon after.

Keenan was again the provider, as he cut in a wonderful sideline ball from 50 yards out, and as it dropped in the penlaty area, Andrew Collier was on hand to flick it past Eoin Fleming to open up a six point lead once again.

That score could have broken Borris-Kilcotton, but they hit back with four points in a row to narrow the gap back down to two points, with Brian Stapeton getting the pick of the scores.

Dwane Palmer pushed the gap back to three points with three minutes left, and that was to be the last score of the game as Borris-Kilcotton’s late push for a goal would prove fruitless, as Camross held on for a three point victory.