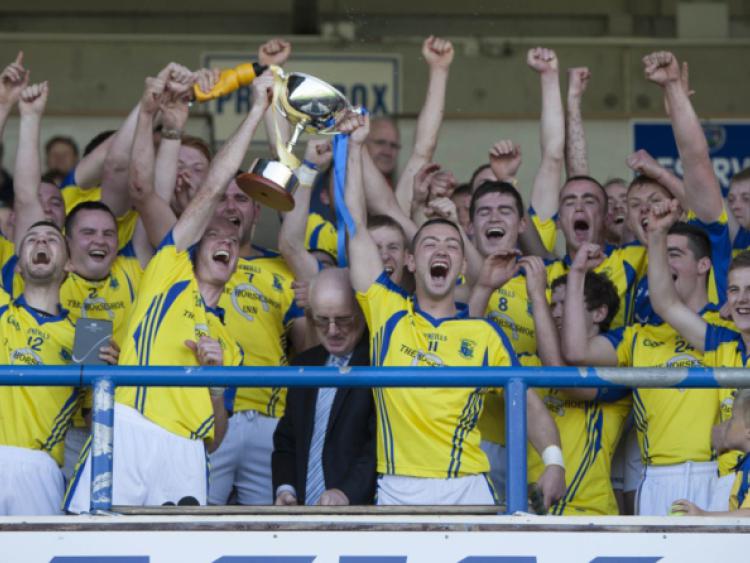 A clinical display from Eoin Reilly saw Abbeyleix ease themselves to the Laois SHC ‘B’ title as a whirlwind first half display set them up for a 15 point win over Ballyfin.

A clinical display from Eoin Reilly saw Abbeyleix ease themselves to the Laois SHC ‘B’ title as a whirlwind first half display set them up for a 15 point win over Ballyfin.

Reilly is more accustomed to keeping the ball out of the net rather than firing it in, but he showed a remarkable eye for goal as he struck 4-4 on the day, with all bar one of his scores coming from play.

Ballyfin struggled to keep him in check for the game, and in particular in the first half when he struck for three goals in the space of 15 first half minutes to all but end the game at half time.

Ballyfin battled for as long as they could, but they knew long before the final whistle that the game would not end in their favour, and it made for a disappointing second half as both teams went through the motions.

Ballyfin had their goal chances in the second half, but they found Enda Rowland in inspired form between the posts for Abbeyleix, and the winners even managed to repel an injury time penalty to compound Ballyfin’s misery.

Abbeyleix now replace neighbours Ballinakill in the SHC, and they will have to move things on another level if they are to survive in what is a very competitive championship.

They have time and youth on their side, as just one of this team was over 30 - PJ Corby, who is 36 - while the next oldest player to start was Stephen Reilly, at 26. They have cause to believe they are building towards something bigger in Abbeyleix, and this win will help them along the way.

In a cagey start to the game, Eoghan Fennelly pointed a free in the second minute and Sean Lowry hit back soon after for Ballyfin, and they would be the only scores in the opening eight minutes of play.

The game eventually exploded into lige after that, however, with Eoin Reilly lighting the fuse on the fireworks which followed. He was afforded a clear run through at John Downey, and he made no mistake from 14 yards for his first goal. Fennelly (free) and Stephn Reilly quickly added points, before George Lanham responded for Ballyfin, whoever stunned by that barrage.

Eoin Reilly and Conor Bergin then pointed before the former struck for his second goal. It took him two attempts to get it, as his first shot was superbly blocked by Garry Dunne, but he gathered up the rebound and squeezed in a shot from a tight angle.

With the wind at their backs Abbeyleix were making full use of every advantage they could give themselves, and Reilly hit his second point moment later as The Fung took a ten point lead.

Sean Lowry responded for Ballyfin with a nice point from play, but Reilly was really fired up now and he soon had his hat trick completed. This one came from much further out, as he won the ball outside the 21, turned onto his stronger left side and fizzed in a low shot which was too hot for John Downey to keep out.

That made it a 12 point lead after 22 minutes, and there only looked like one winner from that point on. Credit to Ballyfin though, they composed themselves and worked some nice scores before half time.

After Lowry and Eoghan Fennelly traded points, Ballyfin hit three in a row, with Lowry bagging two of them and George Lanham the other as they left the three goals in it at half time, 3-7 to 0-7.

Ballyfin needed something major to happen in their favour early in the second half, but it was Abbeyleix who got off to the better start on the resumption.

Stephen Reilly pointed from 21 yards out, and his younger brother then got his fourht goal of the game a minute later. Ryan Peacock was the provider, as his ball in from the left wing was dropping in the penalty area, and Reilly was the only one to attack it, as he doubled on the dropping ball and rattled the back of the net.

Another point from Stephen Reilly moments later well and truly and lingering thoughts Ballyfin may have had of launching a comeback, and the rest of the half was a procession to victory for Abbeyleix.

Ballyfin desperately tried to score goals to get themselves back into the game, but Abbeyleix were standing firm to whatever was thrown at them. A couple of 21 yard frees from Sean Lowry were batted away, but it looked like their bid to raise a green flag was finally going to be realised in injury time when they were awarded a penalty.

It wasn’t to be, however, as the Abbeyleix defence stood firm to protect their goalmouth, and they ran out convincing, and deserving, 15 point winners in the end.