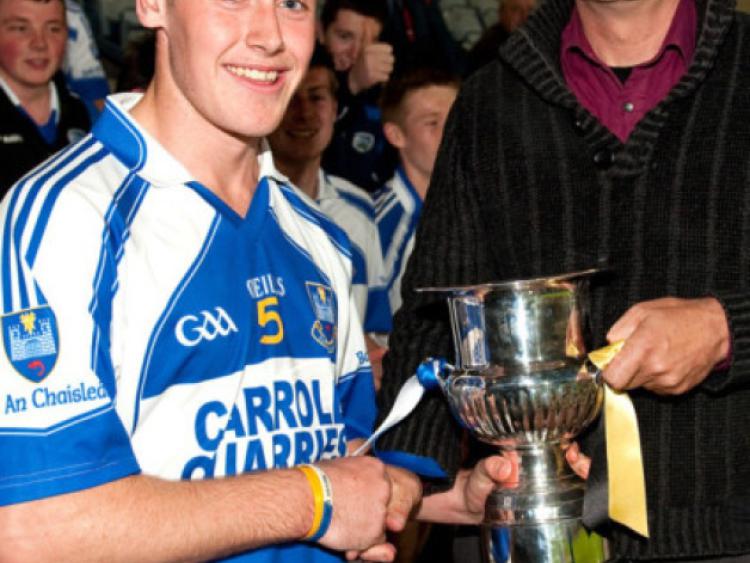 A goal from all of 40 metres with the last kick of the game from John O’Dwyer snatched victory from the jaws of defeat for Slieve-Bloom/Castletown in O’Moore Park on Friday evening.

A goal from all of 40 metres with the last kick of the game from John O’Dwyer snatched victory from the jaws of defeat for Slieve-Bloom/Castletown in O’Moore Park on Friday evening.

O’Dwyer was trying to play a pass inside to Aidan Corby but when The Heath goalkeeper David Phelan ran from his line to cut out the ball, he misjudged the bounce of the ball and it went over his head and rolled into the back of the empty net. It was desperately unlucky on the goalkeeper as he did the right thing in trying to get to the ball and he was very unfortunate to be undone by the bounce on the hard ground.

While O’Dwyer scored the winning goal, it was Ryan Mullaney who kept his side in contention with a superb individual haul of 2-8. The Laois minor hurler scored freely throughout the game including 1-6 of his side’s 1-7 in the first-half. His opposite number Evin Keane was the star of the show for The Heath. He finished with 1-8 and his work-rate in general play was also superb.

The game was played 13-a-side and it was great advertisement for perhaps having fewer players on the field for all grades. There was space all over the field and it led to a free flowing and wide open game with both team taking full advantage of the open areas to produce a very entertaining game.

Inside the first three minutes, both sides had two points on the board with Eddie Carroll and Robert Dowling scoring for The Heath with two from Ryan Mullaney drawing Slieve-Bloom/Castletown level.

Evin Keane and Mullaney exchanged points to leave the sides still level after nine minutes but The Heath pulled away with four in four minutes, three from Evin Keane and one from captain Robert Dowling. The game was being played at a tremendous pace and Slieve-Bloom/Castletown responded with a run of four unanswered of their own, three from Ryan Mullaney and one from Michael Mulhall to tie the scores again after 25 minutes.

Two minutes before half-time, Slieve-Bloom/Castletown took the lead for the first time when a mis-hit close range free from Ryan Mullaney somehow rebounded back into his arms and he made no mistake at the second attempt when he rifled the ball into the back of the net.

The Heath responded well and almost got a goal of their own but Kevin Bergin’s goalbound shot was brilliantly blocked by the Slieve-Bloom/Castletown defence. Evin Keane did pull a point back before half-time to leave the score at 1-7 to 0-8 and they were back in front within six minutes of the restart with a point from James Phelan and two frees from Evin Keane.

Ryan Mullaney leveled the scores and he came close to finding the back of the net but he was denied by David Phelan. Mullaney didn’t find the same space in the second-half as he did in the first as The Heath’s captain Robert Dowling did an excellent man marking job.

Midway through the half The Heath looked liked they had made a decisive break with 1-1 from the excellent Evin Keane. He showed some brilliant indivdual skill for the goal side-stepping his marker before placing tha ball to the back of the net.

With six minutes to go they were still ahead by 1-14 to 1-10 but the game was throw back into the balance when Ryan Mullaney scored a goal from the penalty spot to reduce the deficit to one.

James Mullaney was through on goal but his shot was brilliantly saved by David Phelan however referee Tomas Moore had blown for a penalty signalling that the Slieve-Bloom/Castletown player’s jersey had been pulled.

Ray Killeen put The Heath two ahead ahead again in the frantic closing minutes before a point from Aidan Corby again brought the gap to the minimum. With 90 seconds of injury-time played, John O’Dwyer scored what proved to be the match winning goal as the final whistle went straight after the kick out was taken.