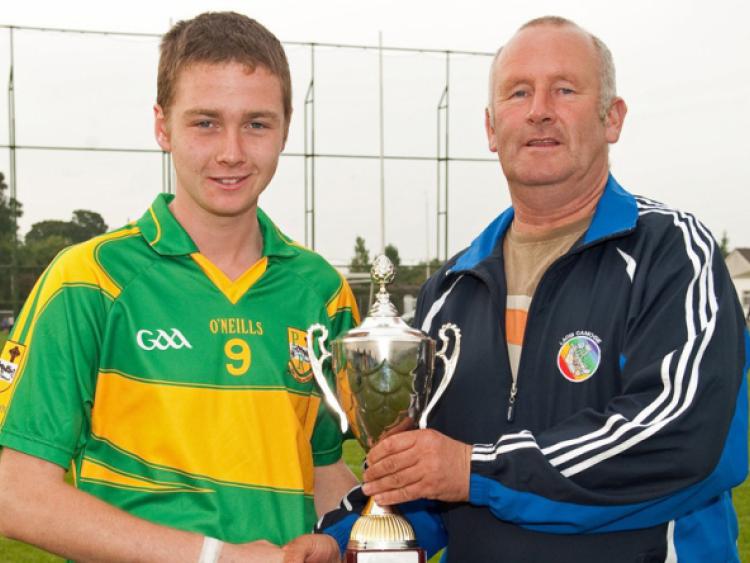 A Park-Ratheniska side that reserved a wonderful brand of total team football for the final produced a major shock last Friday night, as they defeated hot favourites O’Dempsey’s to take the U-16 ‘B’ Championship in Stradbally

A Park-Ratheniska side that reserved a wonderful brand of total team football for the final produced a major shock last Friday night, as they defeated hot favourites O’Dempsey’s to take the U-16 ‘B’ Championship in Stradbally

In doing so ended a long, long sequence of losing underage finals for the club, but they were not to be denied on this occasion with a wonderful display seeing them across the line.

When the sides met in the opening round of the championship O’Dempsey’s had over 20 points to spare, and had inflicted a comprehensive defeat also in the league, but Park-Ratheniska turned the tables in impressive fashion. Even with 14 players for the final 20 minutes they held out for an impressive and well deserved victory.

O’Dempsey’s looked as if they would confirm their recent superiority over the Ratheniska boys as they raced into a 0-5 to 0-2 lead after 19 minutes of play. Amazingly, however, they were to score only once more, and that in the 21st minute of the second half, as Antony Hitchcock’s charges completely turned the game. Park-Ratheniska dominated the second half with a magnificent defensive display, as well as picking off the vital scores for victory.

While Gavin Maher opened the scoring for Park in the first minute, scores from John Cahill (2), Johnny Kelly and Keith Kavanagh had O’Dempsey’s looking comfortably in front as Brian Flanagan and Kavanagh traded further scores.

Then came the games decisive period when Oisin Nolan put Sean Masterson through for a fine score, and then delivered a perfect pass to Gavin Maher. When his shot was saved, Davy McEvoy was on hand to crash the ball to the net, and an excellent point from James Newell gave Park-Ratheniska a 1-4 to 0-5 lead at the break.

On the restart Park-Ratheniska continued the pressure and points flowed from Dinny Cahill, Brian Flanagan and Jason Maher before Oisin Nolan again sent a delightful pass into the path of Jason Maher, and the full forward finished with real style and supreme confidence to the corner of the net.

Minutes later Park-Ratheniska were reduced to 14 players, but it was then that their defence stood firm and repulsed all that O’Dempsey’s could muster. Denis Cranny was in inspired form, and they restricted O’Dempsey’s to a single John Cahill point from a free.

Cranny was one of the heroes of the winning side as he produced at least five top class goal bound saves in the game, as two Dinny Cahill points finished off a famous victory for his side.