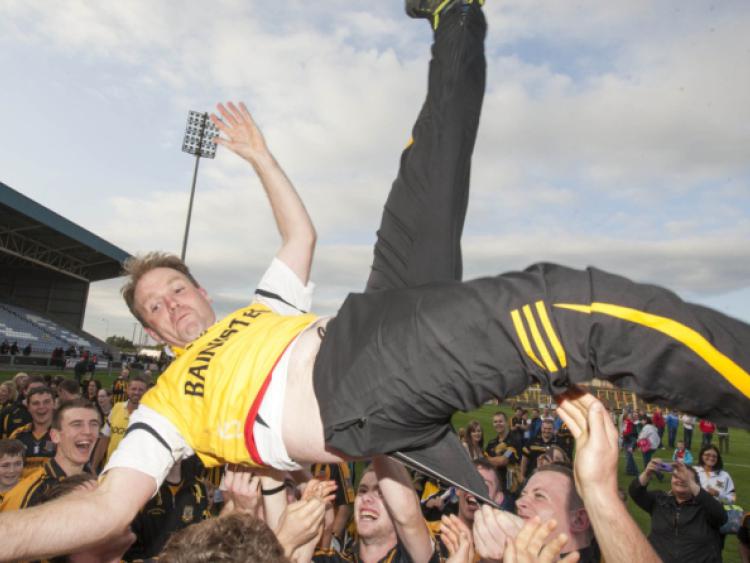 Camross manager Arien Delaney must have woken up with a giant red mark in the middle of his back on Monday morning after all the pats he received there following his side’s win over Borris-Kilcotton.

Camross manager Arien Delaney must have woken up with a giant red mark in the middle of his back on Monday morning after all the pats he received there following his side’s win over Borris-Kilcotton.

Delaney’s delight and pride was obvious for all to see as he celebrated enthusiastically with players and supporters alike. Speaking after the game he explained how much the victory meant to him.

“Words can’t describe how I fell today. We won the U-14 a few weeks ago and I thought that was the best feeling in the world but it doesn’t come close to this. This is unreal. All my life I’ve wanted to do this for this club. We did it together. Camross might have been down but we were never gone. We’re always around and we’re here to stay now.”

When asked about the battling quality of his side, he praised their determination and also explained how tradition was very important in Camross.

“That’s been Camross’ characteristic down through the years. We may not be the best hurlers but by God we have the best heart and the best determination and the best club in Ireland. Everywhere I look in Camross, there’s men with medals. I learned a lot off them and that bunch of players learned a lot off of them. They showed us the way and were are following on the tradition. Today, this bunch of players, it’s their day but it’s also for the whole of the club, the whole of the parish of Camross and all our supporters near and far. Daryl Dooley, Colin Delaney, Joe Phelan, Jobber Moore and others are all out foreign. This is for those guys as well.”

He explained how it was very much a team effort with every player giving their all for the cause including putting their bodies on the line.

“That’s what we’re thought in Camross from the age of nine or ten. It doesn’t matter what you stick in as long as you stick in something.”

While praising the effort of the team as a whole and the team ethic in the camp, he was effusive in his praise for Zane Keenan when he was asked about the performance of the Man of the Match.