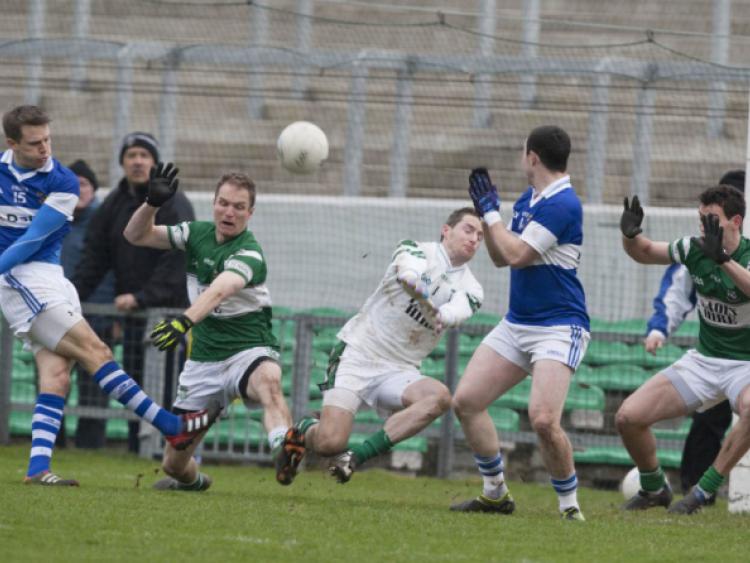 For the second year in a row, Portlaoise were denied in the Leinster final, after a classic battle with St Vincent’s on Sunday afternoon.

For the second year in a row, Portlaoise were denied in the Leinster final, after a classic battle with St Vincent’s on Sunday afternoon.

Just 12 months on from their defeat to Ballymun Kickhams, Portlaoise looked ready to atone for that disappointment when they went four point up early in the second half, but they couldn’t hold on.

St Vincent’s just had that bit more in the tank in the closing minutes, and Portlaoise were left to rue a return of just one point in the last 15 minutes of play.

Even at that, it was still anybody’s game right up into injury time, but the ball just wouldn’t fall in Portlaoise’s favour when they needed that bit of luck the most.

It was a bitter defeat to take, knowing how close they were, but they will surely come again. With an U-21 championship success this year there is more talent to come to the fore, and the desire will remain strong, even if it is clouded by disappointment in the coming days.

Portlaoise made a positive start to the game, even if they did concede the first score. They were bright and positive in the early exchanges, but fell behind with a little over a minute gone when Mossy Quinn floated over a close-range free.

The Laois champions were undeterred, however, and their high-tempo play had St Vincent’s in trouble. Craig Rogers had them back on level terms in less than a minute, and Barry Fitzgerald then set Paul Cahillane up for a fine score to put them ahead. From the resulting kickout, Brian Glynn won possession, and his high, hanging shot was just inside the post as Portlaoise went two ahead.

Eamon Fennell saw a shot for goal saved at the other end, but at the midway point of the half, Mossy Quinn pointed his second free to reduce the gap to one. A Paul Cahillane free pushed Portlaoise back into a two point lead, but St Vincent’s took the game by the scruff of the neck after that.

It started with their first goal, as a cross-field ball from Diarmuid Connolly found Shane Carthy, who played Ciaran Dorney in on goal, and he slid a shot past Michael Nolan. Mossy Quinn then pointed from a tight angle before an excellent individual goal from Ruairí Trainor made it 2-3 to 0-4 in favour of the Dublin champions.

Portlaoise looked to be panicking, and a hurried fisted clearance from Michael Nolan resulted in a point from Gavin Burke, and now there was six between the teams. Cue the Portlaoise comeback.

It was Craig Rogers who provided the spark, as he rounded Michael Savage on the right wing before squeezing a shot to the net from a tight angle. A minute later he was through again before seeing his progress halted in the penalty area, and Fergal Kelly had no option but to give the penalty. Rogers dusted himself off before dispatching the ball to the top corner of the net to level the game.

Both teams managed one more point apiece, and that left them tied at 2-5 apiece before the whistle finally went to bring an exhilirating half of football to a close.

Having finished the first half the stronger of the two teams, Portlaoise got off to the better start in the second half. They won possession from the throw in, and quickly worked it down field to create a chance for Brian Smith, who tapped it over the bar.

St Vincent’s replied with a Mossy Quinn free, but it was Portlaoise who were in the ascendency, and they soon struck for their third goal. A lovely one-two between Brian Glynn and Barry Fitzgerald put Glynn clear on goal, and he finished superbly to the top corner. A Craig Rogers free moments later pushed them four clear, but the St Vincent’s response was swift and clinical.

They attacked at pace which created space in the Portlaoise defence, and Shane Carthy was put through on goal. He held his composure to dummy past Michael Nolan and finish to an empty net for the sixth goal of an incredible game.

A minute later Ciaran Dorney curled over a point off the outside of his left foot, and the teams were level with 20 minutes to go.

Portlaoise took the lead once again five minutes later when Brian McCormack curled over a superb point from the left wing. Last gasp defending then saw Mossy Quinn’s shot for a goal defelcted over for a point, and another point apiece had the teams level with nine minutes left.

In those closing stages, however, it was St Vincent’s who found the little bit extra, as two points from Quinn and one from Diarmuid Connolly proved to be enough to finally settle a pulsating Leinster Club SFC final.