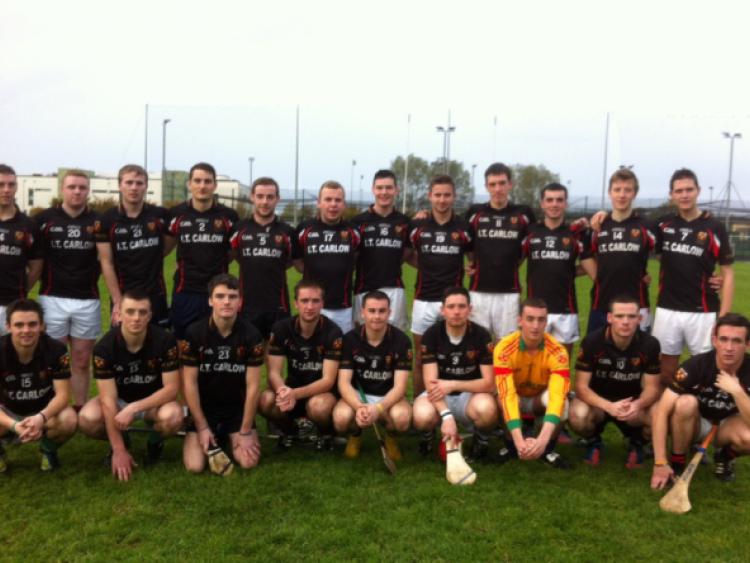 Borris-Kilcotton’s Emmett Jones was the hero for Carlow IT in the Division 1 All Ireland League Final as he knocked over the winning point with the last puck of the game to seal victory over UCC in a hugely entertaining final.

Borris-Kilcotton’s Emmett Jones was the hero for Carlow IT in the Division 1 All Ireland League Final as he knocked over the winning point with the last puck of the game to seal victory over UCC in a hugely entertaining final.

Jones was one of four Laois players on the Carlow IT team along with Camross’ Dwayne Palmer and Aaron Moore and Will Young from Rosenallis. All three played a major part as Carlow IT downed their more illustrious counterparts from Cork by 2-14 to 1-16.

Carlow IT settled quicker into the game played in Waterford IT and led by three early on with scores from Marty Kavanagh, Dale O’ Hanlon and Meath’s Jack Fagan before UCC came to life and went into the lead midway through the first half.

Carlow were dealt a blow with the loss of Carlow senior hurler Marty Kavanagh but his replacement Camross’ Aaron Moore made an instant impact with a point from his first touch.

Carlow got their noses back in front with five minutes to go to half time with a goal from Jack Fagan and a penalty from Offaly’s Conor Doughan to leave the half time score ITC 2-8 to UCC 0-10.

The second half started at a frantic pace as it had finished the first. Westmeath senior full back Tommy Gallagher was a rock in defence for Carlow IT and it gave the platform for Colin Dunford and Mark Russell to gain a foothold at midfield.

However thirty seconds into I njury time, and with Carlow leading by three points, disaster struck when UCC goaled to leave it all square. 60 seconds later the game was still on when Emmett Jones of Borris Kilcotton received the sliotar on the right wing 60 yards out. Jones struck an excellent shot that crept inside the top of the post to put IT Carlow one up.

From the puck out, Tipperary ref John O’ Brien blew the full time whistle With representations from 11 counties on the team this will surely bring a massive