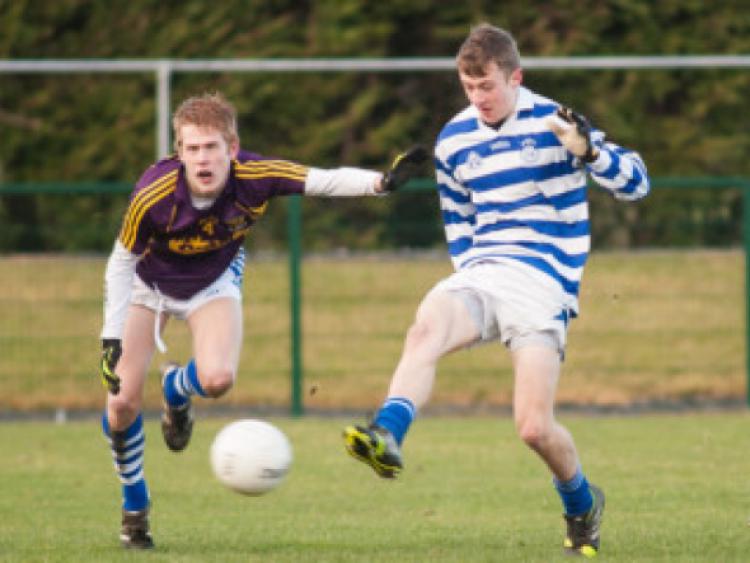 Despite trailing by five points twice in the game and finding themselves 2-11 to 2-6 behind entering the final ten minutes of this riveting encounter, Knockbeg came within inches of snatching a draw that would have kept their interest in the competition alive.

Despite trailing by five points twice in the game and finding themselves 2-11 to 2-6 behind entering the final ten minutes of this riveting encounter, Knockbeg came within inches of snatching a draw that would have kept their interest in the competition alive.

Knockbeg had come back from a poor start to lead in the second-half but a quick-fire 1-3 from the Wexford side turned the game on its head and left the Laois school five points in arrears once again with the clock no longer on their side.

However cheered on by their loyal support in Crettyard, Knockbeg raised their game again and a goal from Arles Kilcruise’s Ciaran Lawlor got them right back in the hunt with time running out.

They threw everything forward in search of an equaliser and they came desperately close to getting back on level terms but a late free from Danny Bolger dropped just short and when the ball eventually came back to a Knockbeg player, the resulting shot went inches wide.

It was a tough defeat for a Knockbeg who more than played their part in an exciting hour of football where the momentum swung time and again.

In the bitterly cold conditions, Good Counsel were quicker out of the blocks and they had five points on the board as Knockbeg struggled to settle into their stride.

Adam Swan opened the scoring and further points from John Walsh, Donnacha O’Connor and two from Sean Ryan left the New Ross based school 0-5 to 0-0 ahead with 20 minutes elapsed.

Knockbeg had their chances early in the game to open their account most notably when Cormac Murphy was put through on goal but his effort was saved by Good Counel ‘keeper Adam Diskin. The net minder was a thorn in Knockbeg’s side in the opening 30 minutes pulling off a string of fine saves to keep his side in front.

Cathal Dunne eventually opened Knockbeg’s account and that score settled the Laois school into the game with the Ballylinan man adding another point soon after.

On the stroke of half-time, Knockbeg blasted themselves right back into the game when Cathal Dunne blasted a shot past Adam Diskin giving the Good Counel ‘keeper no chance. A minute earlier, Diskin’s opposite number Danny Bolger had made a super stop at the other end to stop his side going seven points behind.

As it was, Good Counsel held just a one point lead at 0-7 to 1-3 but they quickly extended that advantage when Donnacha O’Connor fired home his side’s first goal straight after the restart.

Knockbeg managed to hit back instantly however with Cormac Murphy claiming the credit after the ball somehow found its way to the back of the net through a crowd of bodies.

That gave Knockbeg some much needed momentum and they took the lead for the first time thanks to a Hugh Nolan point. At this stage, with the elements in their favour, the game was there for the taking for Knockbeg but Good Counsel hit back strongly and a goal from Sean Ryan and points from Ryan and Ian Carty fired them back into a five point lead entering the closing stages.

For the third time in the game however, Knockbeg wrested back control and they finished like a train as Good Counsel desperately defended their advantage.

Killeshin’s David McDermott reduced the gap to four with a well taken point before Ciaran Lawlor marauded forward to fire home Knockbeg’s third goal and reduce the gap to one.

The Laois school kept coming in search of an equaliser but fortune on this occasion eluded them as a free from Graiguecullen’s Danny Bolger dropped short and a snap shot from the ensuing play went just wide.