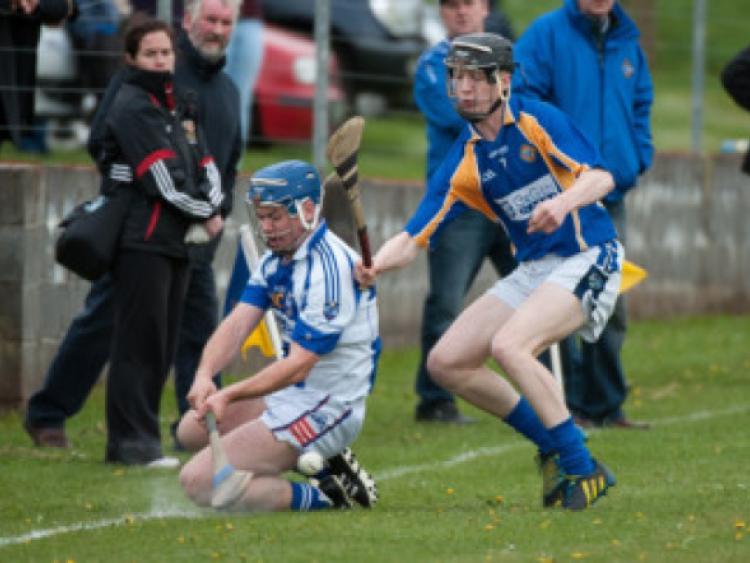 Clough-Ballacolla secured the bragging rights as they got the better of neighbours, Castletown-Slieve Bloom, by the narrowest of margins in a thrilling encounter played in Ballacolla on Friday night.

Clough-Ballacolla secured the bragging rights as they got the better of neighbours, Castletown-Slieve Bloom, by the narrowest of margins in a thrilling encounter played in Ballacolla on Friday night.

Clough-Ballacolla’s Shane Hyland opened the scoring after just two minutes to see his side grab an early lead, but four points on the trot from Castletown-Slieve Bloom’s Ben Conroy (3) and Loughlin Hegarty pushed them three points clear with fifteen minutes gone.

Seamus Lyons added his second of the day approaching the break, but two Clough-Ballacolla points from Shane Hanlon and Stephen Bergin ensured that they went in ahead at the break leading by 0-7 to 0-6.

Despite Castletown-Slieve Bloom opening the second half well with points from Seamus Lyons and Gavin Conroy, Clough-Ballacolla grabbed two goals in as many minutes through Stephen Bergin to stun the opposition.

Seamus Lyons and Shane Hyland went on to exchange points approaching the final quarter of an hour with Clough-Ballacolla leading by four points as the game reached a crucial stage.

Gavin Conroy landed his second of the game from the wing to narrow the gap to three points with thirteen minutes remaining on the clock. Shane Hyland pushed Clough-Ballacolla five points clear with a brace of points, but two long-range frees from Kevin Conroy brought the gap back to three.

Castletown-Slieve Bloom were heaping pressure on the Clough-Ballacolla defence with their countless attacks, but they lacked the composure in the final third.

Shane Hyland added another point to his tally as Clough-Ballacolla led by four point, but Gavin Conroy’s third point of the day narrowed the gap to three points with just minutes left to play.

Shane Hyland went on to land his seventh point of the day in the dying minutes of the game, but there was still time for Barry McKelvey to finally get the better of Danny Hanlon in the Clough-Ballacolla goals to leave just a point between the teams as Clough-Ballacolla held out by 2-12 to 1-14 toreach their third Palmer Cup final in as many years.