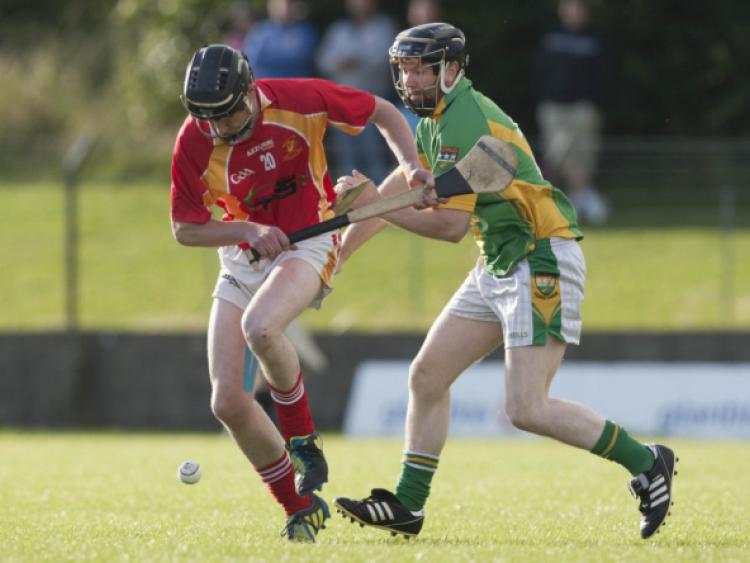 The Harps emerged deserving winners in a relatively one sided affair in Rathdowney on Sunday evening.

The Harps emerged deserving winners in a relatively one sided affair in Rathdowney on Sunday evening.

The Harps started strongly and maintained the momentum throughout taking some excellent scores and defending strongly.

Fresh off their semi-final victory over Rathdowney, The Harps scored 1-2 inside the opening five minutes, setting the tone for the rest of the game. Brian Dunne finished the goal low and hard into the left hand corner after an excellent pass from Brian Galvin from the full back line.

The Harps defended well with captain Shane Phelan, John Prior and Conor Dunne putting in fine performances. Spectators were treated to an exhibition of scores from both sides in the opening half with The Harps’ John Brophy and Clonad’s Kevin Bergin both scoring long range points.

Seoirse Conroy kept Clonad in contention in the opening half with his impressive free taking from all angles. Simiarly, John Brophy demonstrated his free taking skills for The Harps. Ross Young also scored an excellent free from inside his own ‘65. Colin Delaney scored a great point for Clonad after Shane Cahill’s goal effort deflected off The Harps ‘keeper. This left the half time score 1-11 to 0-6 in favour of The Harps.

Clonad put the first score on the board at the start of the second half with another Seoirse Conroy free. The Harps responded to this with Eoin Clancy finding the net for the first of his two goals after a fine run by Brian Clancy.

Credit to Clonad, they kept battling and Kevin Bergin scored a point following a superb catch and pass by Paddy Norton. Bergin added another to his tally five minutes later with a great run up the pitch and a fine finish.

Clonad defended well with Sean Egan, Martin Norton and James Ging continuously putting The Harps forwards under pressure. Conor Brophy scored the point of the game for The Harps from the sideline in the 18th minute to increase his side’s tally. Michael Kerr scored Clonad’s only goal in the 22nd minute after a visionary pass from captain Paul Gnaling.

However The Harps were always in control as John Brophy added more frees and when Eoin Clancy scored his second after an excellent pass from John Brophy, victory was secured. Both teams now look forward to the championship after a fine scoring display.