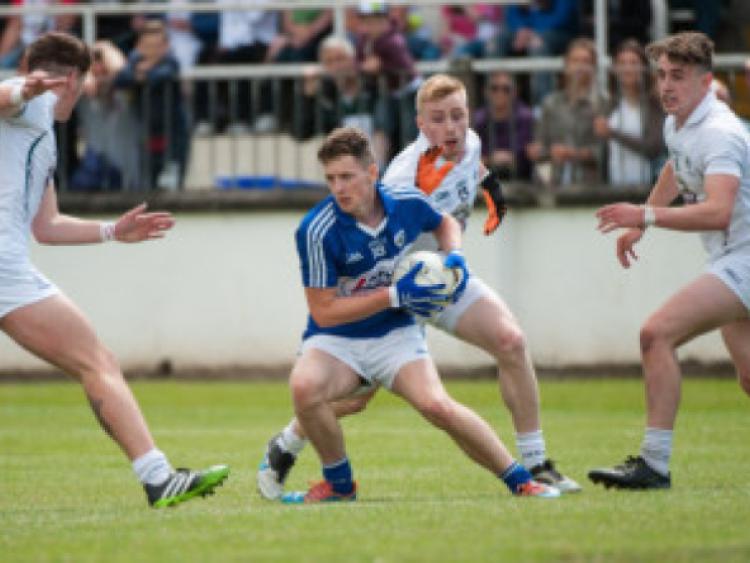 Laois minor footballers saw their dreams of a Leinster final place blown away on Saturday afternoon by a powerful Kildare side in Newbridge.

Laois minor footballers saw their dreams of a Leinster final place blown away on Saturday afternoon by a powerful Kildare side in Newbridge.

The hosts are the reigning Leinster champions, and on this evidence it will take a huge effort to stop them retaining their title.

Certainly for Laois, they could have no complaints at the final whistle. Kildare were bigger, stronger, faster and better in more or less every position.

They defended in big numbers, with 13 of their players inside their own half on plenty of occasions. When they did break forward, they did so at pace and with real direction, particularly in the second half.

Laois trailed 3-3 to 0-2 at half time, with Kildare getting two of their goals in three minutes before the break. Laois half time tally tells it’s own story, as they struggled against the wind and against a resolute and organised Kildare defence.

Laois improved briefly after half time, but they just couldn’t suppress Kildare for any great length of time. They were just too strong on the day, as Laois must now reflect on how to get back to the pinnacle of Leinster football.

It has been said before, and it was most recently highlighted with the U-21s loss to Kildare last year, but the physical difference between Laois and other counties is particularly telling. This Laois side have done a lot of gym work to try to close the gap, but Kildare were streets ahead in terms of physical strength.

It isn’t the be-all and end-all of football, but it is a significant aspect of the game nowadays, and Laois haven’t been matching up for some time now.

As for this game, it took both sides a long time to settle. A little over eight minutes had elapsed before either side registered a score, with a handful of decent chances for both teams gone to waste when Stefan Lawlor pointed to give Kildare the lead.

Laois got their first score in the twelfth minute, in somewhat fortuitous circumstances. Tom Shiel mis-hit a free from 55 yards out and Brian Byrne was alert, plucking the ball out of the air and quickly getting his shot away to bring Laois level.

Parity didn’t last long though, as Kildare worked the ball down the field and got it to Mick Kelly, who swung it over on his left foot.

That was just three scores in 13 minutes, and another lull would follow, as it was the 22nd minute before an umpire was urged into action once more. When the score came, it was a significant one for Kildare.

Corner-forward Kelly took off on a run, and when he got within striking distance, he fired it past Danny Bolger to spark the home side into full voice. To hammer home their advantage, the impressive Conor Hartley then added a point less than a minute later to open up a five point gap.

Colm Murphy gave Laois a brief respite with a fine score from the left wing, off his left foot, but that was a the last score Laois registered in the first half.

Kildare upped the stakes before half time, as they sensed Laois were there for the taking and went for jugular. Rory Feely struck for their second goal when he appeared to get away with a push on Shane Whelan to claim a high ball 35 yards out.

He then turned quickly and sprinted for goal, dispatching a low shot past Bolger to allow Kildare place one foot in the final. It got worse for Laois before they could retreat to the dressing room though, as Conor Hartley cut in from the left wing and hammered a shot to the top of the net.

That left the score reading 3-3 to 0-2 at half time, and with Kildare having hit nine wides to boot, it left Laois in no doubt as to the challenge ahead of them in the second half.

They started the second half very well, playing their best football of the game during that spell. Tom Shiel tapped over a free after Paddy O’Sullivan was fouled, and Shiel turned provider then a minute later when he was fouled, giving David Aston a chance to add another point to Laois’ tally.

Unfortunately that was as good as it got for Laurence Phelan’s men, as Kildare wrestled back control of the game. Mick Kelly pointed a free and Sean Dempsey landed a superb effort from the right wing to cancel out Laois’ early scores.

From there to end, it was Kildare who dominated, and they kept adding on points to open up a 15 point gap by the final whistle, as they face either Dublin or Offaly in the final.