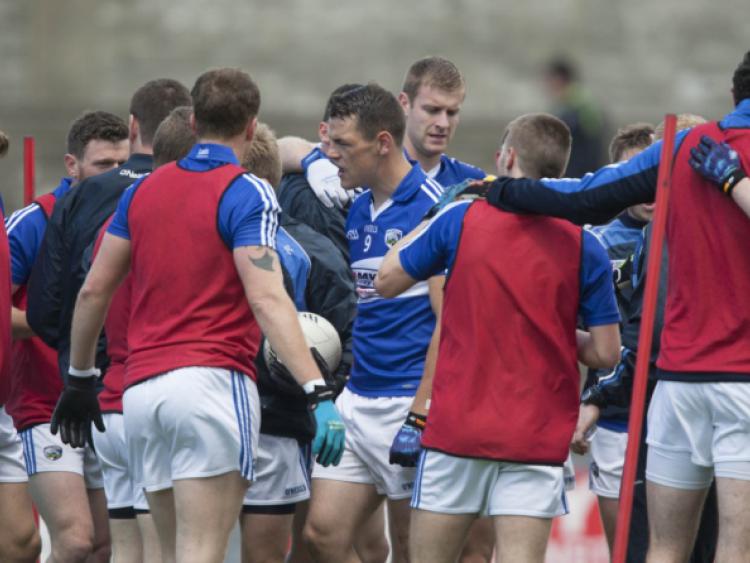 It came right down to the wire but for the second game in a row, Laois showed great resilience and no little composure to secure their place in the next round of the qualifiers with a 0-18 to 0-17 win over Wexford.

It came right down to the wire but for the second game in a row, Laois showed great resilience and no little composure to secure their place in the next round of the qualifiers with a 0-18 to 0-17 win over Wexford.

Two points down with six minutes to go, Tomás Ó Flatharta’s side looked to be on the brink of of a championship exit but two frees from substitute MJ Tierney and a late winner from Niall Donoher, set up by Tierney, snatched victory from the closing jaws of defeat.

This was an old fashioned shoot out with both sides playing with a refreshing abandon throughout that produced a highly entertaining and attacking encounter that would have left exponents of a more defensive game aghast witnessing such a free flowing and wide open spectacle.

The pace of the game was relentless from the throw-in to the final whistle with the sides taking turns to attack as the ball travelled rapidly from one end of the field to the other. That put intense pressure on the respective back lines and Laois struggled at times with direct running of the Wexford attack. Ciaran Lyng was in particularly fine form scoring five points from play.

At the other end Laois looked dangerous when they attacked with pace and precision but they twice went 15 minutes without a score and their finishing and the option taking in these barren periods were poor.

However while faults can be picked with individual aspects of the performance over the 70 minutes, there is no questioning the application, the work-rate and the sheer determination shown by each and every Laois player, none more so than John O’Loughlin who was the driving force behind the win.

Robbie Kehoe, Colm Begley, Billy Sheehan, Kevin Meaney and first-half substitute Damien O’Connor covered every blade of grass in Wexford Park. With marquee forwards Ross Munnelly and Donie Kingston managing only a point apiece from play, Kingston also pointed three frees, it fell to others to carry the scoring burden and Niall Donoher took a major step towards putting some injury ravaged seasons behind him as he scored three priceless points. O’Loughlin also scored four from play and in a brief but telling cameo at the end, MJ Tierney calmly slotted over two frees under immense pressure.

Despite playing with the wind in the first-half, Laois found themselves four points adrift after 16 minutes. They started well with early points from O’Loughlin and Donoher but Wexford wrested control of the game kicking six points in the opening quarter including one from full-back Graeme Molloy.

Laois eventually settled to their task and when Denis Booth was forced off injured, they dispensed with the sweeper system and went man for man at the back. That produced immediate results and four points in as many minutes from Donie Kingston, John O’Loughlin, Ross Munnelly and Conor Meredith drew them level.

They came within inches of a goal in this period as a shot from Ross Munnelly hit the base of the post and bounced kindly back into the waiting arms of Wexford goalkeeper Shane Roche.

It was tit for tat for the remainder of the half as the sides took turns to attack an counter attack with the final score coming from Damien O’Connor to give Laois a one point lead at the break.

The irrepressible John O’Loughlin edged Laois back in front seconds after the restart but Wexford, as they did in the opening period, again took control scoring four of the next five points. Laois were guilty of turning over the ball cheaply and they wasted a number of scoring opportunities when they did get close to the Wexford goal.

The home side managed to maintain their two point lead entering the final five minutes and it looked as if they were going to gain revenge for their defeat in the corresponding fixture in 2013.

However substitute MJ Tierney, who came on when Damien O’Connor was black carded for an incident spotted by an umpire, pointed two frees from the right side, both of which were won by Ross Munnelly.

With the game looking destined for extra-time, Tierney picked out Niall Donoher with a cross field ball and the Courtwood man applied the finish to edge Laois in front.

If the preceding 69 minutes had been frantic, the last two were manic as Wexford attempted to manufacture an equaliser while Laois swarmed after the ball desperate to maintain their slender lead.