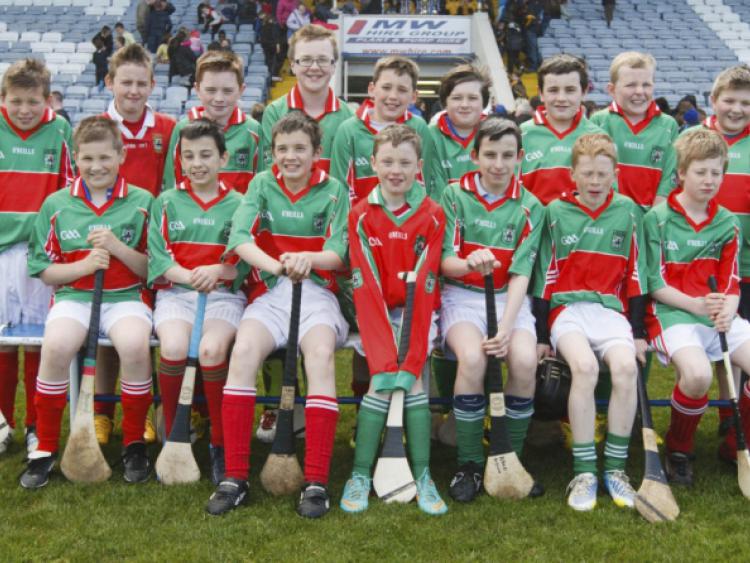 After a tremendously exciting and close game which produced 11 goals and a trio of hat-tricks, Castlecuffe eventually prevailed to claim the Division 6 Boys title in the final game at the Abbeyleix End in O’Moore Park on Thursday evening.

After a tremendously exciting and close game which produced 11 goals and a trio of hat-tricks, Castlecuffe eventually prevailed to claim the Division 6 Boys title in the final game at the Abbeyleix End in O’Moore Park on Thursday evening.

Played at a frantic pace between two evenly matched and very talented sides, a late goal from Ciaran Fitzgerald ultimately proved the difference as Castlecuffe pulled away to claim a memorable win.

Fitzgerald was one of the three players who finished the game with a hat-trick along with his team-mate Oisin Keating and The Rock’s Sean O’Neill.

Keating opened the game at a frantic pace scoring 1-2 inside the first three minutes. The Rock hit back with a goal from Cian Luttrell Cleere and after a point apiece from Aaron Dunne and Sean O’Neill, Luttrell Cleere struck for his second goal to leave The Rock a point ahead after eight minutes.

Aaron Dunne got Castlecuffe back on terms with a point but Sean O’Neill blasted The Rock back in front with the first of his three points.

It was then Keating’s turn to take control and two quick goal, one a rasper to the roof of the net, put his side back into a three point lead. Not to be outdone, Sean O’Neill struck for his second goal to level the scores before Keating added a point to leave Castlecuffe just in front at the break.

Ciaran Fitzgerald found the net straight after half-time to extend the lead but The Rock hit back with a point from Finn Culleton and 1-2 from the excellent Sean O’Neill to put their side back in front. O’Neill’s initial shot was brilliantly saved by Rory Dunne but The Rock player kept his composure to slot home the rebound.

However in a game that swung one way and then the other, the decisive swing came in the final minutes as Castlecuffe snatched the momentum and finished stronger to snatch the win.

A goal from Ciaran Fitzgerald and 1-2 from man of the match Oisin Keating saw them edge away for the win.

The Rock never gave up trying at the other end but they were up against an outstanding defender in Robert Downey who broke up numerous attacks.