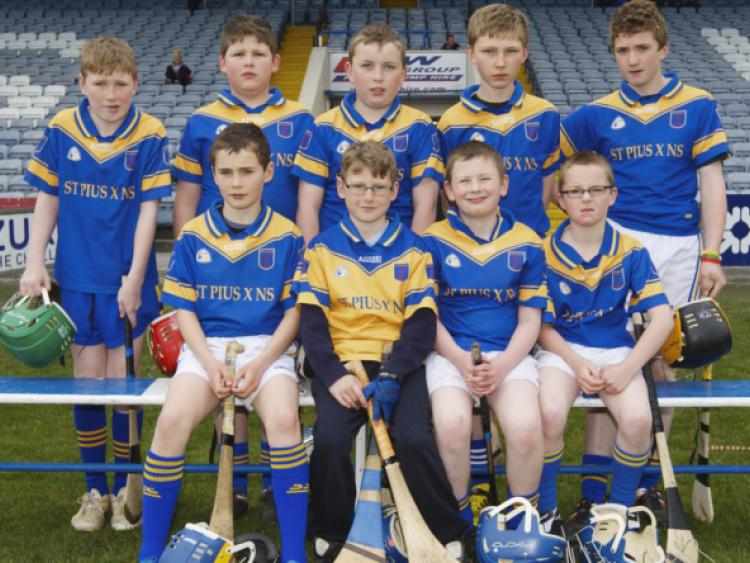 As the old saying goes, goals win games, and that proved to be the case in the Boys Division 7 final last Friday between Ballacolla and Trumera.

As the old saying goes, goals win games, and that proved to be the case in the Boys Division 7 final last Friday between Ballacolla and Trumera.

In one of the most exciting and closely fought games over the two days, it was the Ballacolla side who claimed the win in the end thanks to seven goals scored over the 40 minutes. Trumera battled superbly throughout, and in Adam Ó’Chiardubháin they had one of the best players on show, but unfortunately for them it wasn’t to be on the day.

Trumera had gotten off to a bright start with a free from Adam Ó’Chiardubháin in the second minute, but Ballacolla hit back with two goals from Aaron Brophy. Lee Waite then added a point before Adam Ó’Chiardubháin got Trumera back into it with his first goal of the game from close range.

Both teams traded points before Adam Ó’Chiardubháin then got his team’s second goal, as his long-range free flew all the way to the net. He added a point moments later from a free to get Trumera within two at 3-2 to 2-3, but Lee Waite then scored a goal and a point in the space of a minute to put Ballacolla back in control.

Trumera weren’t about to throw in the towel though, and Ó’Chiardubháin floated over two frees in injury time to see the game finely balanced at 4-3 to 2-5 in favour of Ballacolla.

Ballacolla got off to a strong start in the second half, with Jack Hally rattling the back of the net and Lee Waite scoring a point. Adam Ó’Chiardubháin responded for Trumera with a free, his sixth point, but Waite then hit back with a brace of frees for Ballacolla.

Those scores looked like they would push Ballacolla out of sight, but again Trumera fought back with a point from Ó’Chiardubháin and a goal from Oisín Ó’Faoláin. In a thrilling end to the game from there, Aaron Brophy completed his hat-trick for Ballacolla, and Adam Ó’Chiardubháin saw his shot for a goal from a free saved on the line and deflected over for a point.

Lee Waite rounded off the scoring when his free found the back of the net, as Ballacolla held on for the win.