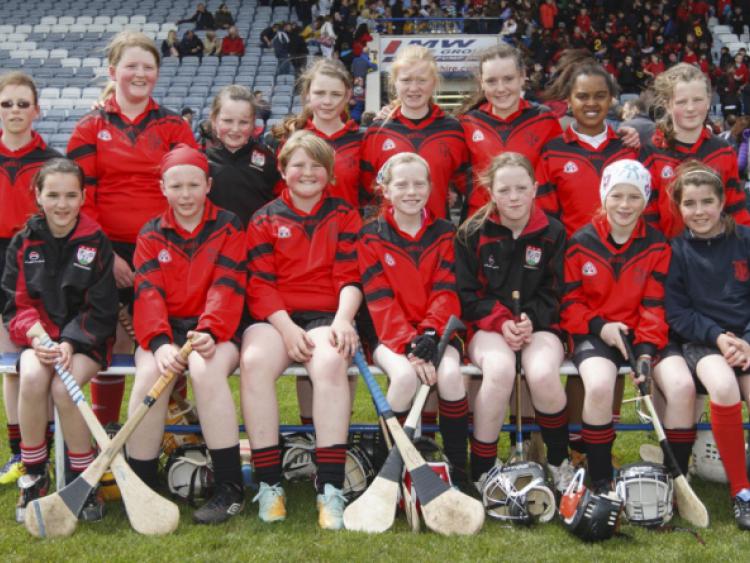 A superb individual display from Alice Walsh fired Shanahoe to victory over a spirited Timahoe side in the Division 5 girls final.

A superb individual display from Alice Walsh fired Shanahoe to victory over a spirited Timahoe side in the Division 5 girls final.

Described in the programme as the ‘Tommy Walsh’ of the team, the speedy attacker accounted for 5-1 of her side’s total while also showing unselfishness throughout the game as she continually looked to pass to her team-mates despite being in a position to add to her personal total.

In fact Walsh should have had another goal to her name but in a bizarre incident, a shot was saved by a white van that dangerously drove across the pitch in front of the goal just as she unleashed her effort. In the windy conditions, the van was bringing sand bags to keep the goals in place.

Despite their best efforts, Scoil Mhuire Fatima, Timahoe could not contain Walsh but showed great character and determination as they battled right to the finish and they were eventually rewarded with a late point from Claire Daly.

By that stage though the game was well won by Shanahoe. Alice Walsh opened the scoring after just two minutes with a goal and she was denied a second by white van man.

Midway through the half she found the net again with a powerful shot that Timahoe goalkeeper Aoife Doyle got a hurl to but the power of the shot got it over the line.

A third goal followed soon after when Leanne Delaney found the back of the net and Shanahoe led by 3-0 to 0-0 at the break.

Any hopes Timahoe may have harboured of getting back into the game were shattered early in the second-half as Walsh added a quick-fire 1-1 to open up a match winning lead.

The player of the game added another two goals in the second-half to put her side well clear before Claire Daly found the target for Timahoe.

In the closing minutes Leanne Delaney added her second goal of the game to round out the win sealing an impressive win for Shanahoe.