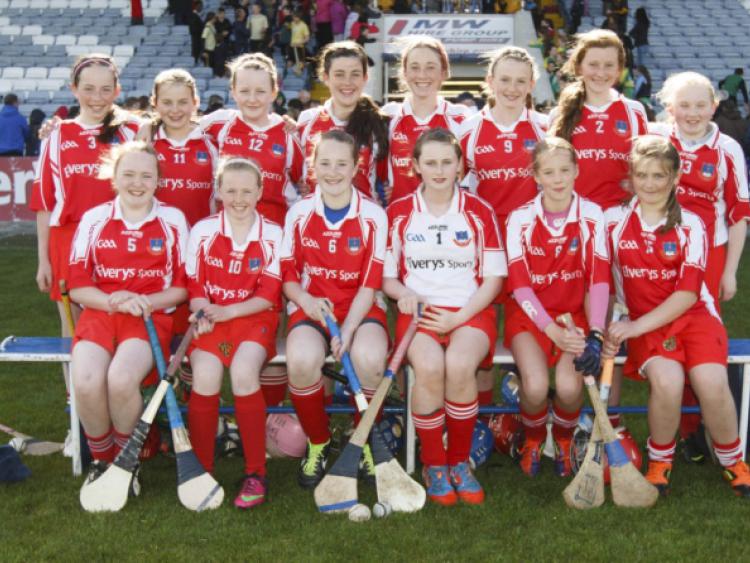 Goals in either half from Emma Lawlor and Gillian Keenan helped Emo claim the Division 1 girls title after a closely fought battle with Camross last Thursday evening.

Goals in either half from Emma Lawlor and Gillian Keenan helped Emo claim the Division 1 girls title after a closely fought battle with Camross last Thursday evening.

In a low-scoring but incredibly tense game, it was Emo’s ability to get scores at vital times which just edged them home, while they also held Camross scoreless in the second half to seal a four point win.

Camross, who had wind advantage in the first half, had opened the scoring when the excellent Aimee Collier floated over a 65 in the fourth minute. Emo almost responded with a goal two minutes later when Emma Lawlor raced through on goal, but Camross ‘keeper Claire Abbott made an outstanding save to deny what seemed a certain goal.

Camross then doubled their lead with a point from Kirsten Keenan, before Emo were again denied a goal. This time Lawlor did manage to get past Claire Abbott, when when she did get her shot away Isobel Donnery was back on the line to make a super save.

Aimee Collier tapped over her second 65 in the 12th minute as Camross went three ahead, but that lead was then wiped out a minute later when Gillian Keenan’s shot nestled in the back of the net.

Camross would get the last score of the half, however, as Collier was on target yet again from a 65 to leave it 0-4 to 1-0 in Camross favour at half time.

Emo were hoping to come out straong at the start of the second half and they did just that, as Emma Lawlor finally got the goal she had been threatening to score all game when she fired to the net after a good run. Gillian Keenan added a point moment slater to put Emo three up.

There would be just one more score in the remaining 17 minutes, but the excitement never let up as the play ebbed and flowed from one end of the field to the other, but unfortunately for Camross they just couldn’t get the score they needed to level the game.

It was keft to Emma Lawlor to round off the game, as she showed her football skills by kicking the ball over the bar with two minutes to go as Emo held on for a four point win in the end.