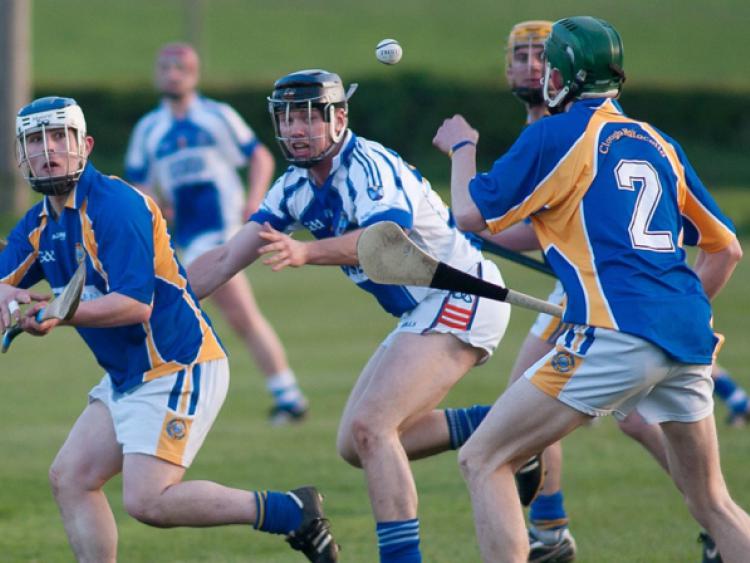 A breezy, but sunny Castletown provided the backdrop for this bitterly close clash on Wednesday evening, with Clough-Ballacolla turning around an 0-11 to 1-4 half time deficit to win by two points in a hugely entertaining encounter.

A breezy, but sunny Castletown provided the backdrop for this bitterly close clash on Wednesday evening, with Clough-Ballacolla turning around an 0-11 to 1-4 half time deficit to win by two points in a hugely entertaining encounter.

In what was a game of two very contrasting halves, Castletown-Slieve Bloom dominated the opening half, while Clough-Ballacolla completely dominated the second, with the latter’s goal - which came against the run of play in the first half - proving the difference in the end.

Castletown-Slieve Bloom opened the scoring with a mere twenty seconds on the clock when James Hooban weaved his way through the Ballacolla defence to raise the white flag for the ideal start. Fionan Cuddy followed up Hooban’s point with a clinical strike from forty yards to open a two point window after five minutes.

Clough-Ballacolla opened their account a minute later with top-scorer on the day, Damien Bergin, grabbing what was to be his first of nine in the game, with Shane Hanlon adding another soon after.

Points from James Hooban and Fionan Cuddy restored the Castletown lead to two points, as they looked to be gradually controlling the game. Completely against the turn of play, Mick McEvoy sliced his way through the Castletown defence before rifling the ball into the corner of the net.

Castletown-Slieve Bloom responded with five unanswered points, four of which came from John Gaughan, to restore their four point cushion. The half fizzled out with James Hooban and Damien Bergin firing two points apiece to leave the half time score at 0-11 to 1-4 in favour of the home side.

In an early exchange of points after the restart, John Gaughan fired two for Castletown and Loughlin Hegarty slotted a point, while Damien Bergin (3), Mick McEvoy and Aidan Doyle al picked up points for Ballacolla in an action packed opening ten minutes to the half.

Clough-Ballacolla took hold of the game from here and pushed on with six unanswered points, courtesy of Damien Bergin (3), Mick McEvoy, Stephen Bergin and Canice Coonan to all but wrap up the match, as two late points from Castletown proved in vain as the visitors ran out two point victors.