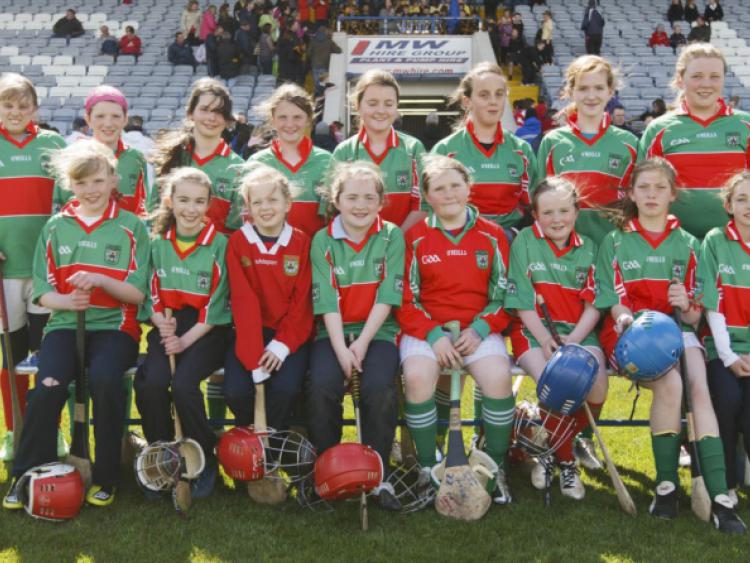 Kathleen Blake was the star of the show in the Girls Division 4 Final as Castlecuffe claimed the title with a 3-1 to 1-0 win over Ratheniska on Thursday in O’Moore Park.

Kathleen Blake was the star of the show in the Girls Division 4 Final as Castlecuffe claimed the title with a 3-1 to 1-0 win over Ratheniska on Thursday in O’Moore Park.

The 6th class pupil, who lists Henry Shefflin as her favourite player, scored 2-1 in an excellent display where she also spent time sweeping in the back line helping to maintain her side’s advantage.

Ratheniska battled gamely from start to finish but after opening the scoring early in the game, they found it difficult to create chances with Kathleen Blake proving to be the rock on which many attacks floundered.

Ratheniska made the perfect start to the game with a goal after six minutes from their midfielder Ellen Connolly.

Castlecuffe struck back with a point from Kathleen Blake and the midfielder fired her team into the lead five minutes from half-time with a rasping shot to the back of the net.

There was still just a point in it at this stage but before the break Castlecuffe extended their advantage when Rachel Dooley found placed her shot past Roisin Quigley in the Ratheniska goal to leave her side 2-1 to 1-0 ahead at the break.

Ratheniska came close on a number of occasions to getting back in the game after the restart but despite their best efforts, they just couldn’t find the goal that would get them back into the encounter.

That was due in large part to the efforts of Kathleen Blake who dropped deeper in the second-half to help out her defence.

However it was at the other end that she made a telling contribution as she shot home her second and her side’s third goal midway through the half to give Castlecuffe breathing space.

Ratheniska never gave up the ghost and impressive substitute Lisa Buggy in particular was very unlucky not to score but in the end Castlecuffe held on for a deserved win a making it a memorable double on the day for the school as the boys had already won the Division 6 Final.