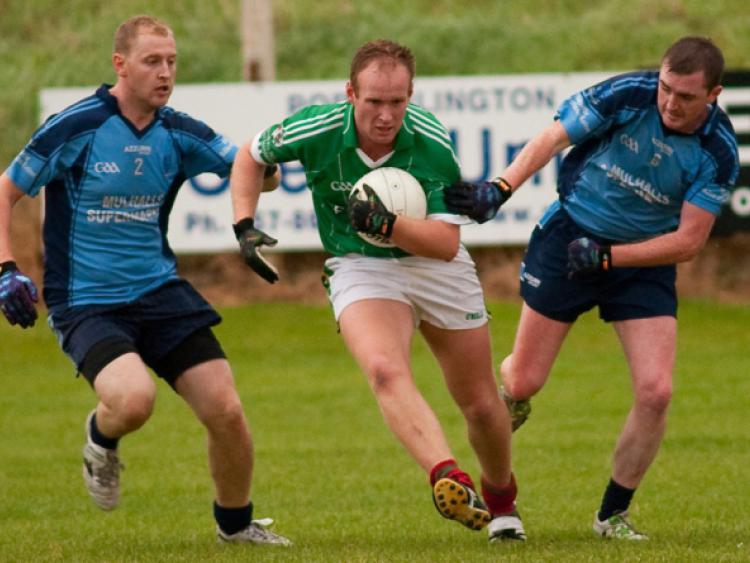 Ballyroan Abbey will attempt to end their IFC final hoodoo this Sunday, as they face up to Clonaslee-St Manman’s in their third final in a row.

Ballyroan Abbey will attempt to end their IFC final hoodoo this Sunday, as they face up to Clonaslee-St Manman’s in their third final in a row.

Since their relegation from the senior championship in 2010, Ballyroan Abbey have qualified for finals in 2011 and 2012, only to see their dreams of promotion wrecked by Killeshin and Emo respectively.

Now it is Clonaslee St Manman’s who provide the opposition, with Mark Rooney’s side attempting to make their own return to the SFC after suffering relegation last year, their second time to do so in five years.

Ballyroan Abbey will enter the final as favourites, given their past experience and their relatively straightforward route to the final. They have won all three of their games, including a second round match-up with Clonaslee St Manman’s, and have been looking a little more dangerous this year with MJ Tierney back in the fold.

The opened their season with a hard fought 2-11 to 2-7 win over Annanough, had to work similarly hard to beat Clonaslee St Manman’s, before beating Annanough for a second time in the semi-finals.

It’s a nice, neat road to the IFC final, and they have been tested at various stages and responded well, but it is their performance in the final which is ultimately the most important thing.

They have been unlucky in some respects regarding their opponents in the last couple of years. They met a Killeshin side in 2011 that had avalanche levels of momentum behind them, as they were sweeping everyone aside at the time. Last year they met an Emo side that had been surprisingly relegated the year before, and were always going to be too strong for whatever was thrown at them in the IFC.

They will fancy their chances more against Clonaslee St Manman’s, but therein could lie their biggest problem. There’s no doubting they are due a win at this level, but that doesn’t guaratee they will get it.

Clonaslee are the masters of upsetting the apple cart as well, and will have every confidence in themselves to spring another surprise. They have had a longer journey to get here, including a first-round replay with Portlaoise and that defeat to Ballyroan Abbey. They have played five games already, which might not be a bad thing.

One feature of their play this year has been how well they have defended, as they are conceding less than 10 points per game. Another statistic in their favour is their penchant for goals, having scored eight in five games, but they have managed just 38 points too. If Ballyroan Abbey can defend their goal and limit Clonaslee’s chances, then they will take away their most potent attacking threat.

The scores have been well spread out for Clonaslee too, however, with 12 different players scoring so far in the championship. They have had seven different goal scorers and the burden gets spread around, compared to Ballyroan Abbey, who rely heavily on Scott Conroy and MJ Tierney. Between them they are scoring over 60% of their team’s scores.

That only becomes a problem if they are held in a game, and so far no team has managed to do that, but it is atask Clonaslee will attempt to pull off.

The meeting between the teams earlier this year was interesting as well, as Ballyroan Abbey took the lead early on, only to be hit with 1-4 in the ten minutes before half time, as Clonaslee lead 1-5 to 0-5 at the break. Ballyroan got back level before a melee broke out and killed the flow of the game, and the men in sky blue went on to win.

Clonaslee will have learnt from that, and going by that spell in the first half, they know they can do damage against this Ballyroan Abbey team. They will need to be far more consistent if they are to beat them however, as they never scored in the second half of that game.

On the balance of things, Ballyroan Abbey look to have all the tools they need to finally claim the IFC title. Clonaslee are a very dangerous side, however, and Ballyroan must be mentally ready for the battle as well as everything else. So long as they have that side of things taken care of, they should be good enough to win.