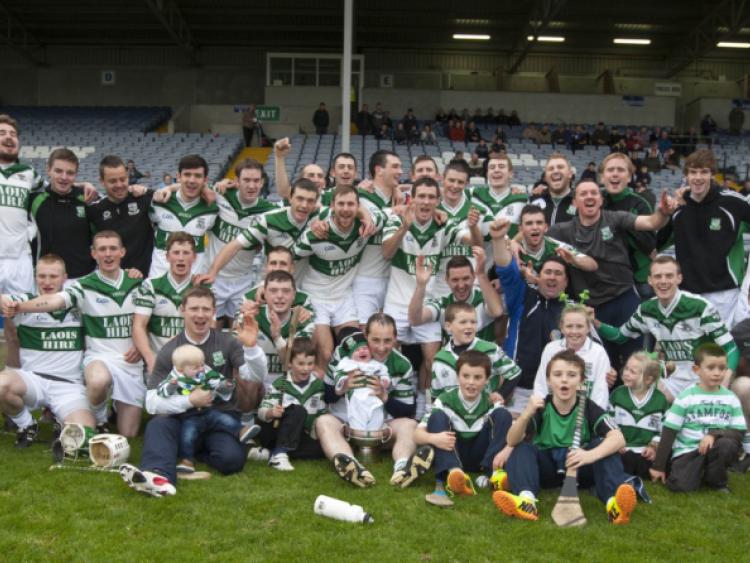 An excellent second half performance from Portlaoise saw them claim this year’s JHC ‘A’ title after an entertaining game against Clough-Ballacolla.

An excellent second half performance from Portlaoise saw them claim this year’s JHC ‘A’ title after an entertaining game against Clough-Ballacolla.

Despite the final scoreline, there was just three points between the teams with ten minutes to go. Portlaoise finished strongly, however, and they were not to be denied from claiming a deserved victory in the end.

Portlaoise were facing into a stiff enough breeze in the first half, but it didn’t show any sign of slowing them down in the early exchanges as they looked sharp in the opening minutes. They won two frees in the opening few minutes, but Sean Culleton’s radar was a little off and both of them trailed wide.

It was third time lucky for him, however, as he finally opened the scoring the fourth minute with a point from a free. Two minutes later he added another, and he would keep that form up for the remainder of the game, as Portlaoise took control of proceedings.

Colm Gleeson opened his account with a nice point on the run to see Portlaoise lead 0-3 to no score after the first ten minutes. Clough-Ballacolla would not open their account until the fifteenth minute, when Shane Hyland slotted over a free from the left wing after he was fouled. Two minutes later they were almost in for the first goal of the game, as Alan O’Flaherty caught a long ball on the edge of the square, but excellent defending from Chris Lynch kept him at bay.

Shane Hyland hit back again for Clough-Ballacolla, and Sean Culleton (free) and Sean Corby traded points before Broghan Reilly made a point-blank save to deny Mick Dunphy. That was the last action of the half, as the teams headed for the dressing rooms with the scores reading 0-5 to 0-4 in Portlaoise’s favour.

Portlaoise had wind advantage in the second half and they wasted little time in putting it to use, as Sean Culleton fired over a 50 yard free with less than a minute of play gone. Chris Lynch then denied Alan O’Flaherty another goal chance with some excellent last-gasp defending, but Clough-Ballacolla would get within one minutes later when Mick Dunphy popped over a point from 30 yards.

That left the gap at the minimum, but it was the next few minutes of play which would swing the game in Portlaoise’s favour. Colm Gleeson pointed from the left wing after winning a puck out, and substitute Daniel Delaney added another from close range after Sean Culleton’s shot for a goal hit the crossbar. Culleton then added a long range free before Jo Jo Thompson chipped in with his second point of the day, and Portlaoise opened up a commanding 0-10 to 0-5 lead.

Clough-Ballacolla composed themselves after that barrage of scores, with Shane Hyland and James Maher both pointing frees to get them within one score, but that was as close as they got. Culleton added three points for Portlaoise from placed balls in the next five minutes to put them six ahead, and with Clough-Ballacolla reeling, he then delivered a knock-out blow. Dermot Costelloe won possession on the right wing, and started a move that included Daniel Delaney and Thompson, who in turn fed Culleton who cracked home a great goal.

That was pretty much that, as Portlaoise eased themselves to a deserved win.