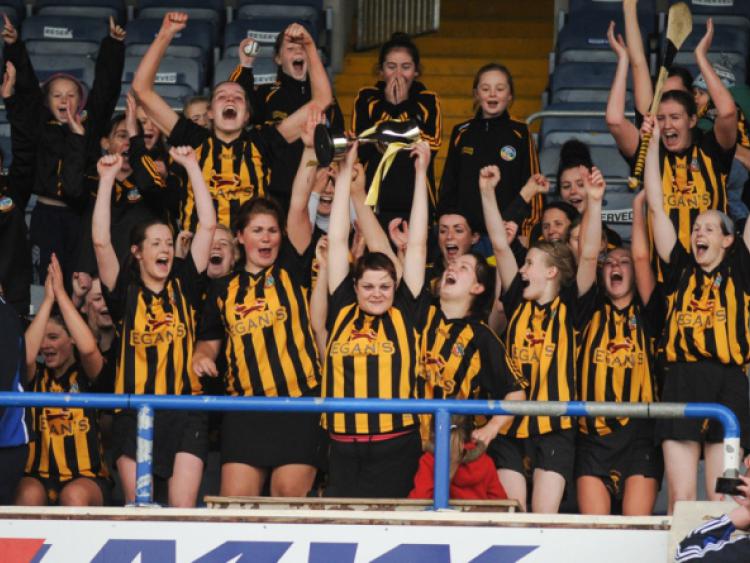 There was little between the teams in general play over the hour with O’Moore’s more than holding their own in their first ever final however it was the clinical finishing of the Camross forwards and their tight marking in the full-back line that proved to be the difference on the day.

In the first-half O’Moore’s registered seven scores to just four for Camross however they went to the break trailing by 0-7 to 3-1. Camross put the game away early in the second-half scoring 1-5 without reply but O’Moore’s never through in the towel and held their opponents scoreless for the last 17 minutes of the game while tacking on three points of their own.

Unfortunately for the final debutants, they rarely got a clear site Jennifer Moore’s goal and having conceded four goals, they were never going to win the game with points alone.

O’Moore’s almost made the perfect to the game when a hopeful ball across from the impressive Laura Marie Maher glanced off the face of the crossbar before before it was scrambled clear by the Camross defence.

Camross marched straight up the other end and, after a long range free from Sarah-Ann Fitzgerald was only half cleared, Olga Parkinson brilliantly struck the lose ball to the top corner of the net from all of 20 metres.

Two points from frees from Laura Marie Maher got O’Moore’s back within one but after a point from Therese Keenan, Maeve Collier cut through the defence and drilled the ball to the back of the net. With O’Moore’s reeling, Camross struck for a third goal which came at the end of a superb passing move. Lizzy Ryan started the move when she won possession in midfield and she picked out Niamh Dollard with a short pass off the hurl. Dollard in turn found full-forward Therese Keenan and she made no mistake with he finish to the back of the net. That score left Camross 3-1 to 0-2 ahead but O’Moore’s held sway in midfield and that platfrom helped them claw their way back into the game before the break.

Two Laura Marie Maher points from fress bracketed their first point from play after 22 minutes from Sinead Lanham to reduce the gap to five. Before half-time Rosemarie Bermingham and Laura Marie Maher added further points and they had a half chance of getting level before the break but a shot from Rachel Williams was bravely blocked by Mairead Burke.

O’Moore’s had held the upper hand in midfield in the first-half but the switch of Niamh Dollard to the engine room helped Camross gain a foothold in this crucial area and gave them a platform to give more possession to their forwards.

Sarah-Ann Fitzgerald opened the scoring in the second-half with a free before Lizzy Ryan struck for the crucial fourth goal after a goal line scramble.

Three more points from Sarah-Ann Fitzgerald, two from frees and one long range effort from play, extended the gap between the sides to double figures and Niamh Dollard made it 11 soon after with her first point of the game.

That score came after 43 minutes and it proved to be their last score of the game but their excellent full-back line of Fidelma Conroy, Brigie Cuddy and Ashling Burke kept things tight at the other end restricting O’Moore’s to just three more points from Laura Marie Maher, Alison McEvoy and Rosemarie Bermingham as Camross held on for an eight point win.