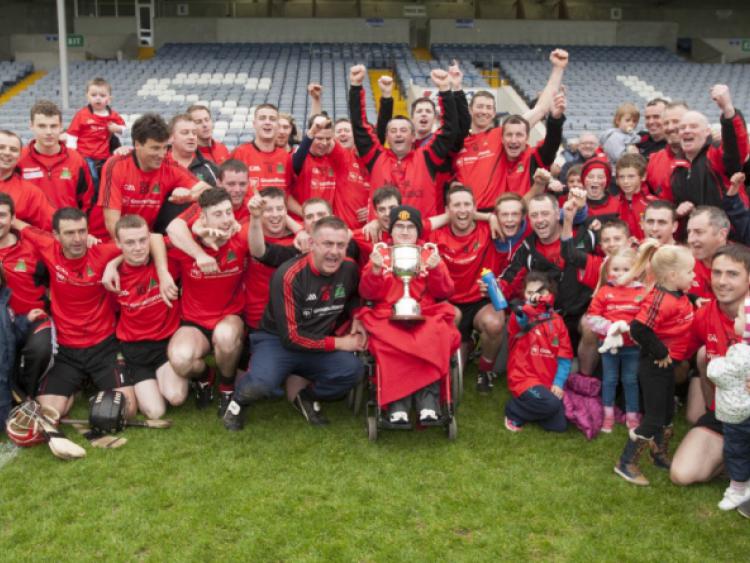 A devastating display from Shanahoe earned them a historic win in O’Moore Park on Sunday afternoon, as they saw off Trumera in the IHC final.

A devastating display from Shanahoe earned them a historic win in O’Moore Park on Sunday afternoon, as they saw off Trumera in the IHC final.

The scoreline above will give you an idea of the kind of game this was, as it certainly wasn’t one where defences were on top. It was full of great attacking play, and some of the scores taken over the course of the hour were of the highest quality.

Shanahoe picked the right time to play their best game of the year, as everything just seemed to click for them. They scored 3-21 in total, with an incredible 3-19 of that coming from play, and eight different players getting on the score sheet.

Their goals came at crucial stages too, with their first arriving just before half time, and the second coming just as they started to put some serious daylight between themselves and Trumera. The third came with ten minutes to go and killed the game off once and for all, and Shanahoe could start the celebrations early, with Trumera managing a couple of late consolation goals.

The first half was played at a ferocious pace, with Shanahoe getting the first score of the game through Jimmy Kirwin. Trumera responded a little over a minute later, and that set the tone for a game that swung form end to end. Anthony Kirwan and Sinnott traded points before Shanahoe broke the routine with points from Fintan Bowe and Leigh Bergin to lead 0-4 to 0-2 after 11 minutes.

Joey Coogan and Sinnott (free) quickly had Trumera back level at 0-4 each, and the teams would go score for score with thre each to see them tied at 0-7 after 17 minutes. The pace was already relentless at this stage, and and Shanahoe tried to force their way ahead with two scores on the trot. Niall Sinnott responded for Trumera with a free, but two more for Shanahoe saw them open up a 0-11 to 0-8 lead.

Trumera weren’t fazed by that spurt, however, and two long range frees from Cathal Brophy got them within one, but Shanahoe would have the final say. Anthony Kirwan would strike for a goal before half time, but he was first denied by a wonderful save from Ronan Kavanagh. A minute later though, a long ball from Leigh Bergin fell kindly for him, and he gave Kavanagh no chance the second time to see Shanahoe lead 1-11 to 0-10 at half time.

Both teams retreated to the dressing rooms then, but from the restart it looked like Shanahoe were the only team to reappear. Liam Cuddy opened the scoring with a point from distance after catching a puckout, and Darragh Cripps tagged on another seconds later. With momentum on their side, Shanahoe pushed forward and added further points through Karol O’Keeffe and a great solo effort from Leigh Bergin, with Cathal Brophy offering brief respite for Trumera.

Things would soon go from bad to worse, however, as a Darragh Cripps shot for a point from the left wing deceived Ronan Kavanagh, and the ball dropped under the crossbar to give Shanahoe a 2-15 to 0-11 lead. They had one hand on the trophy now, and they got the second hand on it minutes later when Anthony Kirwan struck for their second to put them 13 points clear.

To Trumera’s credit the battled right to the end, and were rewarded with goals from Cathal Brophy and Eddie O’Connor, but there could be no denying Shanahoe a deserved victory, and the had 11 points to spare at the end of a very impressive hour of hurling.

It’s on to the Leinster series now for Shanahoe too, as they will meet the Kilkenny champions in Round 1, and they have home advantage.