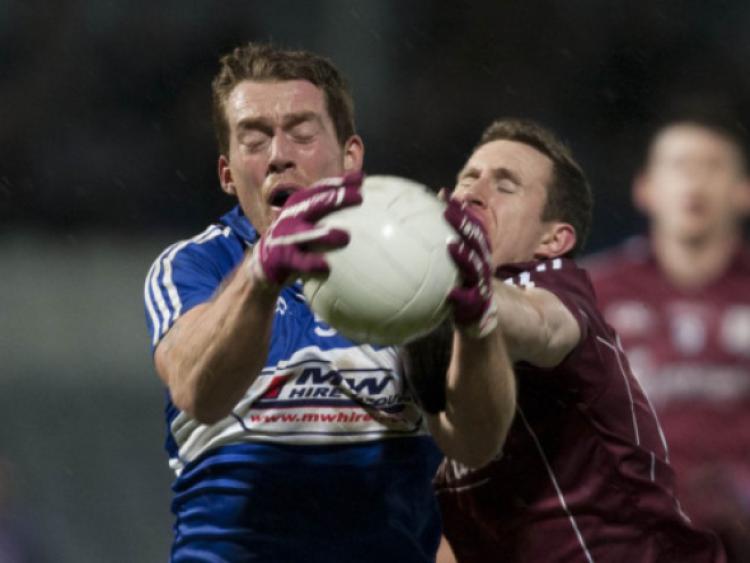 Laois footballers made it back-to-back wins in their Division 2 campaign on Saturday night, as they breezed past a timid Galway outfit in O’Moore Park.

Laois footballers made it back-to-back wins in their Division 2 campaign on Saturday night, as they breezed past a timid Galway outfit in O’Moore Park.

After an even opening quarter to the game, Laois took control of proceedings late in the first half and never looked back from there. They bossed the midfield exchanges and scored at will against a Galway side who just didn’t know how to contain them.

Laois were 15 points ahead when the final whistle sounded, but it could have been much more. There were times in the first half where passes went a little astray that would have lead to more scores, and overall Laois looked like a side that were still settling into a new style of play.

They have more to do on that front, and they will face stiffer tests than they met here, but there were plenty of positives to take from the win. Ten different players scored from play, with 1-15 of their 1-20 total coming from play as well.

The defence was energetic and robust throughout the 70 minutes as Laois forced countless turnovers, the most prominent of which resulted in the game’s only goal.

John O’Loughlin and Kevin Meaney were so dominant in midfield that Galway were forced to replace their midfield pairing before the final whistle. The good news keeps coming up front too, where Donie Kingston gave one of his best performances in recent memory after being restored to the full-forward line.

Added to that is the continued good form of Ross Munnelly and Gary Walsh’s obvious eagerness to force his way into the starting team, and you can understand why there were smiles aplenty in the Laois dressing room afterwards.

With Conor Meredith still to come back into the fray as well, a bit more competition should be added to the forward ranks over the rest of the league, so the onus is there for the players to keep pushing on.

The early stages of this game gave little indication of how the things would actually turn out, as the teams seemed evenly matched for much of the first half. Galway opened the scoring in the third minute with a Gary O’Donnell point from the right wing, but it was quickly cancelled out by Donie Kingston.

Kingston almost had a goal moments later when he rounded Joss Moore and raced clear on goal, but he dragged his shot wide. A Ross Munnelly free soon after meant that Laois took the lead for the first time, but Seanie Armstrong was quick to respond for Galway, as both teams sized each other up early on.

Another point apiece left them tied at 0-3 each at the 20 minute mark, but Laois started to move through the gears after that. Kingston slotted over a free and Munnelly added one from play at the end of a good move to put Laois three ahead before they pounced for a goal.

Galway tried to move the ball out of their full-back line, but good anticipation from Colm Begley saw him intercept a slack pass. He then put Kevin Meaney through on goal, and he made no mistake to slide the ball into the bottom corner.

Both sides then managed two more points each before half time, and that left Laois with a five point half time lead, and the wind advantage to come in the second half.

They didn’t waste their time in putting it to work, with two points coming in the opening minute. Kevin Meaney supplied the first from the right wing, and then Billy Sheehan got in on the act with a fine effort off his left foot.

Seanie Armstrong hit back for Galway with a free, but Laois would hold them scoreless for the next 26 minutes, as they put the seal on the victory themselves.

David Conway responded for Laois before Donie Kingston made space for himself on the right wing and split the posts for a lovely point, as Laois started to find their rhythm. John O’Loughlin then picked out Ross Munnelly with a pin-point pass to allow the Arles-Kilcruise man slot over, before O’Loughlin himself added another off his left foot.

That Laois run killed the game as a contest, but there was still room for more scores, with some Laois subs getting in on the act. Gary Walsh hit three points in the space of two minutes, while Adam Ryan made his way up from the back to fire over the bar as Laois kept piling on the scores.

That left 15 in it in the end, and Laois were full value for it, with an away game against Armagh to come this weekend.