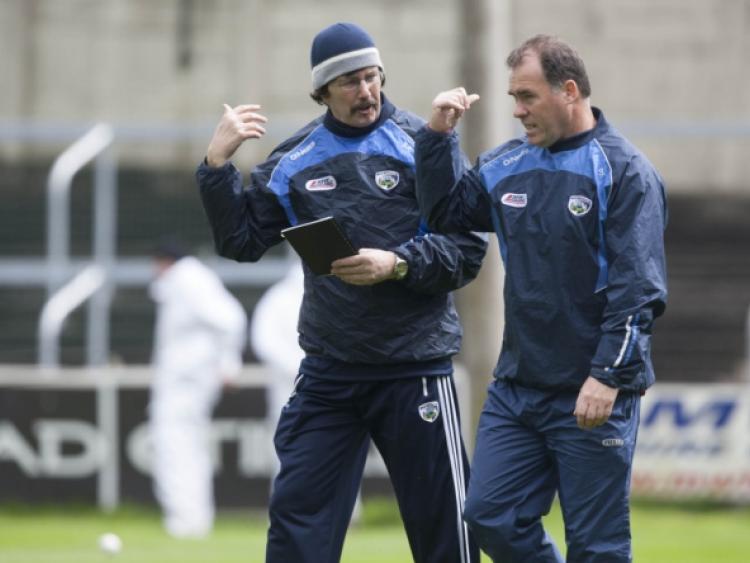 Laois manager Seamas Plunkett admitted he was happy with the win, but disappointed with his team’s performance despite watching them claim an eleven point win on Sunday.

Laois manager Seamas Plunkett admitted he was happy with the win, but disappointed with his team’s performance despite watching them claim an eleven point win on Sunday.

Laois were on control throughout the game against Carlow, and even though they never looked like losing, the Portlaoise man would have liked to seen more from his team.

With Carlow not really threatening, the chance was there for Laois to really push on, and Plunkett felt his players failed to do just that. “I wouldn’t be happy with the performance today really. We’re happy with the result obviously, but I just thought there were parts of the match where we should have pushed on and made scoring a little bit easier for ourselves, and we didn’t.

“If anything, I’d say we took our foot of the gas to an extent. I’m delighted with the result, if you had asked me an hour and a half ago that we would come away from playing Carlow with a result like that I would have been delighted.

“There were some improvements from the last day against Westmeath and we certainly were a bit sharper than we were last Sunday, but you have to remember we went through a league campaign, had no break before this championship.

“At the end of the day it is still a league campaign, so there are little things like that which are leading to us being a small bit sluggish and lacking a small bit of sharpness, and over the next couple of games we build up that sharpness and get a bit of momentum behind us.”

Having played with Stephen Maher in a deeper role against Westmeath, Laois tried a different setup on Sunday, and Plunkett feels it’s important his players have the ability to adapt their style of play. “We were looking to play a different system, we need to learn different systems with the way we want to play.

“You cannot just have one system, because if you do that, and the more quality team you play will counteract that. You need more balance in your play and that’s what we’re trying to do. It worked in the first half and then we went conventional after 20 or 25 minutes and I think that worked fairly well for us, so we were trying to change things around today.

“Some things worked, some didn’t. We just want to work on more methods of playing, and that was one of the reasons we did that today.”

It’s London up next now, and they are his sole focus. “We’ll only be looking at the London game, bearing in mind that a fortnight ago they drew with Carlow, so we’ll be taking nobody for granted.”