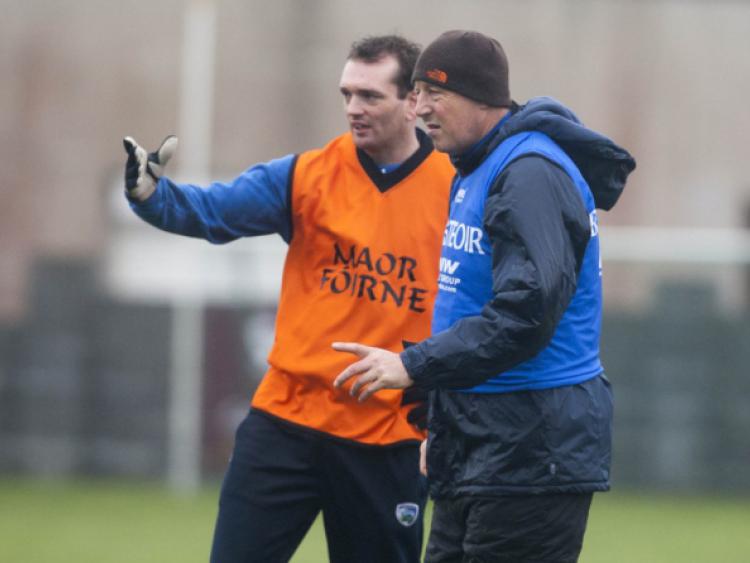 Laois senior football manager Tomás O Flatharta is expecting his side to face a tough examination from Wicklow this Sunday, as they begin their Leinster SFC campaign in Aughrim.

Laois senior football manager Tomás O Flatharta is expecting his side to face a tough examination from Wicklow this Sunday, as they begin their Leinster SFC campaign in Aughrim.

Laois are looking for their first win in the Leinster SFC for three years, with the hosts aiming to replicate their opening round win over Longford last year.

O Flatharta may be new to Laois, but he’s not new to the Leinster SFC, and he knows well the threat that Wicklow will pose. “Wicklow will be very pleased they have the game at home. They have a few players back from injury from last year so they’ll be looking forward to having them back.

The Kerry man has some alterations to make to his team, especially in defence where both full-backs, Denis Booth and Mark Timmons, are unavailable due to suspension and injury respectively.

While not an ideal scenario, O Flatharta is happy that he at least has had time to plan for the change. “We’re making alterations at the moment and preparing for that. At least we had a few weeks to prepare for it. Mark won’t make this game but he’s making good progress so we’ll give him another couple of weeks.”

Defender Padraig McMahon has also been speaking ahead of the championship opener, and the Ballyroan Abbey man is eager to see Laois atone for some poor performances in the Leinster SFC in recent years. “Yeah, we’ve been very disappointed with our campaigns in the last two or three years, we’ve gone out in the first round or the very early stages, and we’d be hoping to do a bit better than that, but we can’t look past Wicklow.

“Because we have lost in the first round for the last couple of years, we have to concentrate on that, and that’s where our particular focus is right now.”

Throw in for this Sunday’s game is at 3.30pm on what is a busy weekend on the Laois GAA calendar. The minor footballers are in action on Saturday afternoon against Wexford, in Wexford Park, while also on the Sunday, the senior hurlers will be looking to make three wins in a row against London in Ruislip