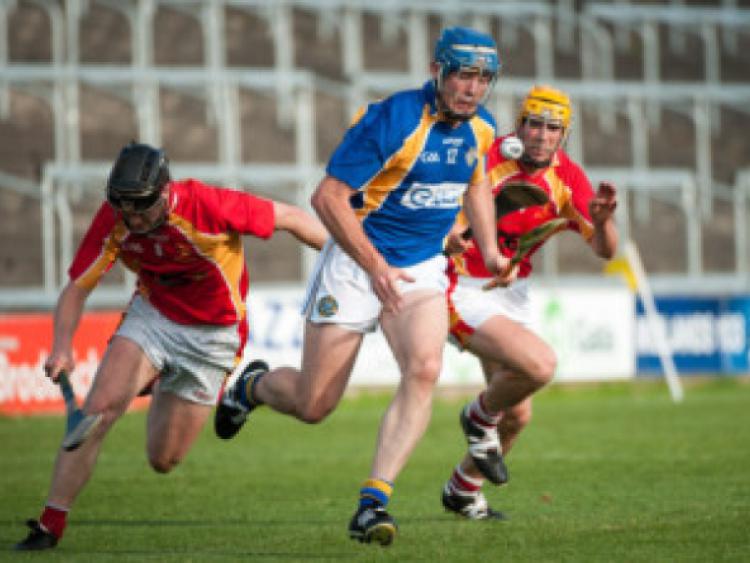 Leading by 1-10 to 0-5 at half-time, Clough Ballacolla would have been expected to cruise home against their neighbours from The Harps in the first game in O’Moore Park on Sunday.

Leading by 1-10 to 0-5 at half-time, Clough Ballacolla would have been expected to cruise home against their neighbours from The Harps in the first game in O’Moore Park on Sunday.

The 2011 champions had eased away late in the first-half and a goal from Willie Dunphy with the last action of the opening 30 minutes left them with the cushion of an eight point lead.

That became nine shortly after the restart but incredibly The Harps scored the next eight points without reply to pile the pressure on a stuttering Clough-Ballacolla side.

A fine individual goal from Picky Maher steadied the ship entering the last ten minutes and while The Harps did manage a late goal from Barry Dunne, it was too late to change the outcome of the game.

What looked like a very serious injury late on to The Harps’ impressive full back Brian Galvin meant there was a lengthy delay but thankfully the defender made his way off under his own steam, albeit with a considerable limp.

Up to that Galvin had marshalled a well organised and hard working back line that dominated the majority of the second-half allowing Eoin Clancy and John Brophy at the other end to drag their side back into the game.

There was little to chose between the sides in the opening quarter as they were locked on three points apiece. The swirling wind made shooting difficult with both sides putting up as many wides as scores in this period.

As the half progressed, Clough-Ballacolla began to take control with Picky Maher deadly from frees, Willie Hyland putting over a sideline and Aidan Corby contributing three from play.

With the half almost over, a hopeful long ball was not dealt with by The Harps defence and Willie Dunphy was on hand to dispatch the lose ball to the back of the net.

That left Clough-Ballacolla with a handsome eight point lead and Dunphy increased that to nine shortly after the restart.

The Harps had struggled to make an impression against the rock solid Clough-Ballacolla half-back line of John A Delaney, Brendan McEvoy and Canice Coonan but in the second-half, the hard work of Eoin Clancy and John Brophy in particular began to open up spaces.

The Harps enjoyed an excellent spell scoring eight unanswered points to get right back in the game. A long range effort from Ronan Delahunty was followed by three frees in succession from Brophy. With the momentum firmly on their side, The Harps continued to press forward and Conor Brophy, Eoin Clancy, Brain Dunne and John Brohy again had them back within one.

Clough-Ballacolla were firmly on the rack but a point from a sideline from Willie Hyland steadied the ship. Points from Willie Dunphy and another from Hyland followed as they re-established a four point lead.

The Harps to their credit came again with points from Clancy and Brophy but they were again denied a goal again by the swift reactions of Danny Hanlon. The game swung decisively and finally in Clough-Ballacolla’s favour when Picky Maher scored 1-2 in four minutes, the two points from frees and the goal coming at the end of a defence splitting run. Maher had been well marshalled by Brian Galvin for the majority of the game but the one time he got a run on goal, he made The Harps pay.

The Harps kept going to the final whistle and were rewarded with a goal from Barry Dunne after a great point off the hurl from John Prior.

In the end however they came up just short as points from Maher, Mick McEvoy and the impressive Willie Dunphy saw out the win for Clough-Ballacolla.