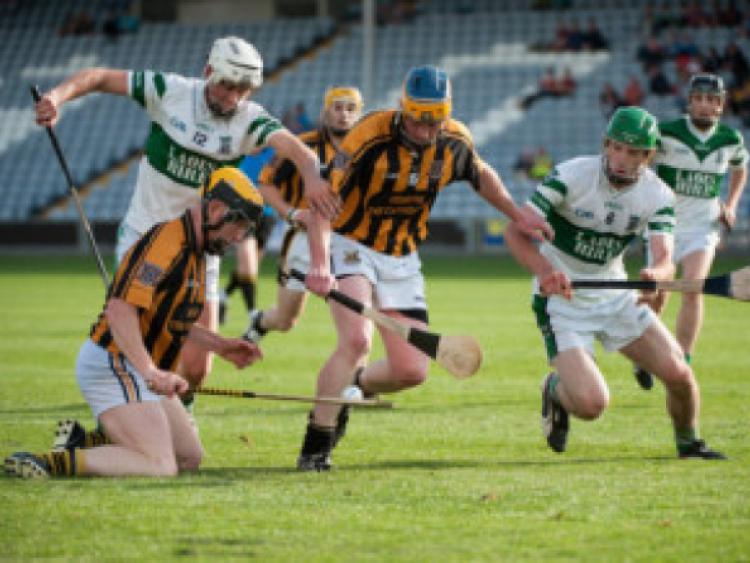 The first game in O’Moore Park last Saturday evening was supposed to be a one sided affair with defending champions Camross expected to dispose of Portlaoise with relative ease.

The first game in O’Moore Park last Saturday evening was supposed to be a one sided affair with defending champions Camross expected to dispose of Portlaoise with relative ease.

The only problem with that assumption was that no one bothered to tell Portlaoise they were just there to make up the numbers as they put in a hard working and determined performance that was infinitely better than anything they produced in an abject an winless league campaign.

With three minutes of injury-time played, they looked as if they had snatched the win when Joe Phelan launched over a free from inside his own ‘65. However there was still time and, with what turned out to be the last puc of the game, Darren Gilmartin held his nerve to snatch a draw for Camross.

Portlaoise will look back ruefully on ten first-half wides, four from frees, when they were very much on top. Camross for their part will point a clear goal they were denied late in the first-half when play was called back for a Camross free when Tomas Burke was clean through on goal.

On balance a draw was probably the fairest result. Portlaoise blasted out of the blocks and by the 13th minute they had build a deserved 1-4 to 0-2 lead. With Joe Phelan playing as a sweeper in front of his full-back line, Portlaoise were hoovering up vast amount of ball at the back and Cian Taylor and Tommy Fitzgerald.

Camross eventually wakened from their slumber and from the 13th to the 53rd minute they outscored their opponents by 13 points to five. Portlaoise were not finished however and a goal from Tommy Fitzgerald gave them a lifeline in the game. Cue the grandstand finish with both sides going for the win before, eventually, this enthralling contest finished in a draw.

Camross owe their survival to the contribution of Darren Gilmartin who scored 11 of their 17 points. He was the only player to score more than once in the game. He was deadly accurate from frees and on a day where Portlaoise were wasting chances, that reliability from placed balls was crucial.

Portlaoise played with a sweeper throughout with Joe Phelan dropping back to patrol between the half-back and full-back lines. He was like a magnet for the ball and his use of possession was impressive as he rarely played an aimless pass forward.

Portlaoise’s intensity from the start was in stark contrast to Camross’ lethargy and it was the underdogs who made the flying start. A brace of frees from Cian Taylor and two monster efforts from Tommy Fitzgerald inside the opening five minutes got them going. Andrew Collier and Darren Gilmartin responded for Camross before the vocal Portlaoise support was given even more to get excited about after 13 minutes when Darragh Rigney drove the ball to the back of the net from a penalty after he was fouled.

Portlaoise were dominating the game but a steady stream of wides meant they weren’t as far ahead as they could have been. After seeing off the early blitz from their opponents, Camross gradually found their composure and by half-time, thanks largely to Darren Gilmartin, they were just a point adrift at the break at 1-5 to 0-7.

Playing with the wind in the second-half, Camross were soon in front with points from Aaron Moore and Gilmartin but Portlaoise continued to dig in and by the midway point of the half, thanks to three Cian Taylor frees, they were back in front.

Their efforts began to tell however as Camross rattled off the next four points, three more from Gilmartin. After Gilmartin and Taylor exchanged points, Camross still led by three entering the final five minutes and it looked as if Portlaoise’s valiant effort was going to fall short.

Again however they hadn’t read the script and, after a long free was allowed to bounce inside the Camross 20 metre line, Tommy Fitzgerald reacted quickest to bury the ball past Tadgh Dowling. From the puc out, Darragh Rigney gathered possession and stuck over a point to put Portlaoise back into the lead.

The pace in the final minutes was frenetic. Gilmartin pointed a free as the game ticked into injury-time to level the scores. Portlaoise were awarded a free inside their own ‘65 and from wide on the left, into the wind, Joe Phelan launched it over the bar to wild cheers from the Portlaoise supporters.

Camross threw everything forward in search of an equaliser. Three times Portlaoise cleared their lines but three times the ball came back. With all eyes on the referee, Camross were awarded a free 45 metres out with close to 66 minutes on the clock after Tomas Burke was fouled.

Darren Gilmartin held his nerve under pressure to put the ball over meaning the sides will have to do it all again next Sunday evening in O’Moore Park.